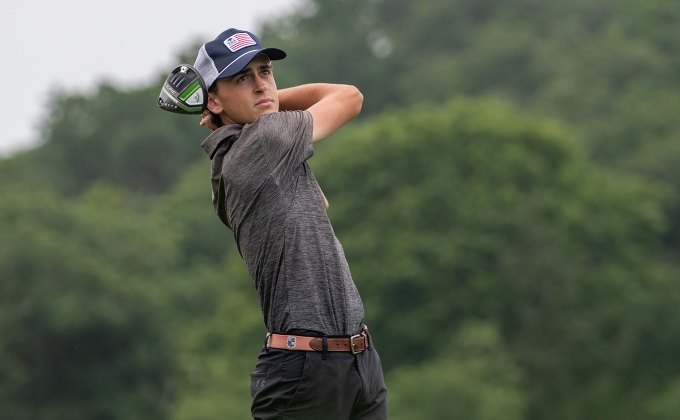 NEW CITY, N.Y. (July 13, 2021) – With the top four seeds eliminated in Tuesday’s two rounds of match play in the 104th Met Junior Championship Sponsored by MetLife, a quartet of players will be aiming for a breakthrough win, Wednesday at The Tuxedo Club.

Colin Summers of Westfield, N.J., Charlie Berridge of Scarsdale, N.Y., John Hiller of New York City, and Owen Walsh of Katonah, N.Y., all won a pair of matches to secure their semifinal slots.

Though Summers, the No. 9 seed, was two down heading to the back nine in both of his matches, he maintained poise and mounted comebacks on both occasions. “I get uptight and my mood changes really quickly,” admitted Summers, who owns the most Met Junior experience of the group, having advanced to the quarters in 2020. “My caddie Nick Conti helped me out a lot with that and kept me from losing it.”

In the morning, Summers made a trio of consecutive birdies to close out Matt Simon of New York City, 3-and-2, while he defeated a hot Cameron Besaw of New Canaan, Conn., who eliminated top-seeded Cole Ekert of Chatham, N.J., after securing the final match play slot in a playoff.

Summers will face Berridge, who earned wins by 4-and-2 and 2-up margins, respectively, against Michael Ostrower of New York City and Tyler Donnellan of Riverside, Conn.

“I was hitting the driver really poorly yesterday and I started hitting it well today,” said Berridge, a Cal commit. “My wedges were on point and I started putting well. I was just kind of all-around pretty sharp and stayed pretty solid down the stretch.” Berridge is the top seed remaining in the bracket, qualifying in the No. 5 slot.

Fifteen-year-old Hiller—the youngest remaining player in the field—defeated Colin McCullagh, 2-and-1, in the morning and held off two-time MGA/MetLife Boys champion Reed Greyserman of Short Hills, N.J., 2-up in the afternoon.

For Hiller, the No. 7 seed, a focus on his own game and a strong wedge attack helped secure his semifinal spot. “All you have to do is try to play the course,” said Hiller. “It’s very hard to do, but I think I did a very good job of that today.”

Hiller was 2-down in his morning match with nine holes to play, but won the next four holes to claim momentum. Against Greyserman, the match stood tied through 14 holes, but Hiller proved clutch win wins on Nos. 15 and 18 to seal the win.

Walsh, the No. 11 seed, credited his driving for his pair of victories, a 3-and-1 win over Barnes Blake of Westfield, N.J., and a 1-up victory over Steven Lee of Scarsdale, N.Y.

“My ball off the tee was really good, I didn’t miss too many fairways,” said Walsh. “When you hit fairways it’s pretty easy going.”

Walsh was 1-down entering the 17th hole against Lee, but made a clutch five-footer for par to win the hole and tie the match. On 18, Lee found a penalty area off the tee and again as he went for the par-5 green on his third, allowing Walsh to seal the victory.

“I haven’t really made it that far in these junior events so I’m super excited to be there and hopefully I play as well as today,” said Walsh, expressing similar comments as the rest of the first-time Met Junior semifinalists.

Wednesday’s semifinals will begin at 8:00 a.m., with the championship match taking place in the afternoon.

Competitors have enjoyed competing at The Tuxedo Club, which this week sets a record for hosting its ninth different MGA event as it hosts the nation’s oldest junior championship for the first time. Despite heavy rains both Sunday night and again Monday evening, the course has been in fantastic condition and tested players from tee to green, setting a premium on positioning.