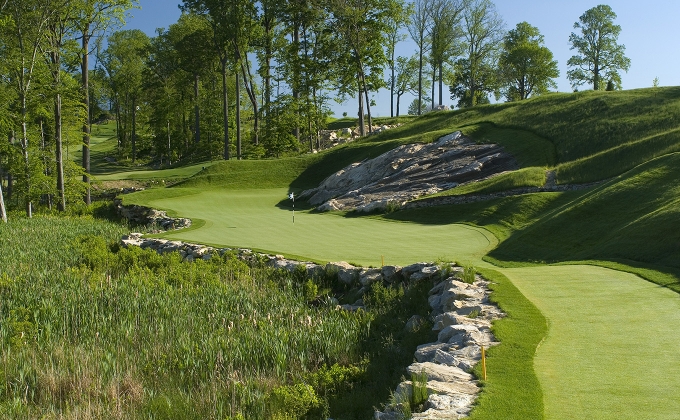 ELMSFORD, N.Y. (February 1, 2021) - On June 17, the 73rd MGA Public Links Championship heads to Pound Ridge Golf Club in Pound Ridge, New York, as one of the nation's premier public venues welcomes an MGA championship for the first time. The striking layout, which sprawls across open meadows and through forests on 172 acres, will surely test players' skill in their aim to earn the title of champion in the nation's oldest public links championship.

Competitors have five opportunities to advance to the championship proper of the 36-hole event, with qualifying rounds taking place at five sites throughout the Met Area between May 10-24:

Registration for MGA, LIGA and WGA championships opens on March 1.

Pound Ridge Golf Club, which opened in 2008, stands as the Met Area's only Pete Dye design. It's a distinctly Dye layout, presenting a fair, yet compelling test for players facing its sweeping fairways and rolling green complexes. Throughout the round, players encounter dramatic mounding, fescue, winding streams and eye-catching rock outcroppings. It stretches to 7,165 yards from its back tees, playing as a par 72.

Players will surely leave the course with a myriad of memorable holes, including the par-5 13th that features "Pete's Rock" in the middle of the fairway, and the par-3 15th known as Headstone, where the elongated, yet shallow 9,000-square-foot green is backed by a striking rock face. The course features includes a number of risk-reward opportunities, while players must place a premium on both shot-making and strategy.

A group of golfers at Hendricks Field Golf Course in New Jersey became the driving force behind the MGA Public Links, inspired by the U.S. Amateur Public Links. After not being contested between 1973 and 1983, the MGA reinstated the championship in 1984 and it has since been played on the Met Area's top public layouts, most recently including Neshanic Valley, Griffith E. Harris, and Ballyowen, while famed Bethpage Black has hosted eight times.

The championship has produced memorable results in recent years. While it was not played in 2020, Gray Barnes captured the title in 2019, carding a stellar 4-under 68 en route to victory in the rain-shortened event. Barnes started with a 1-over 37 on his first nine, but found his swing over his final nine and fired a 5-under 31 to capture the victory. Jonathan Jeter of Nassau Players produced a record nine-shot victory in 2018, while Alex Kang claimed the title in a playoff at Ballyowen in 2017. Pound Ridge is sure to add another oustanding chapter to the MGA's Public Links Championship record book.