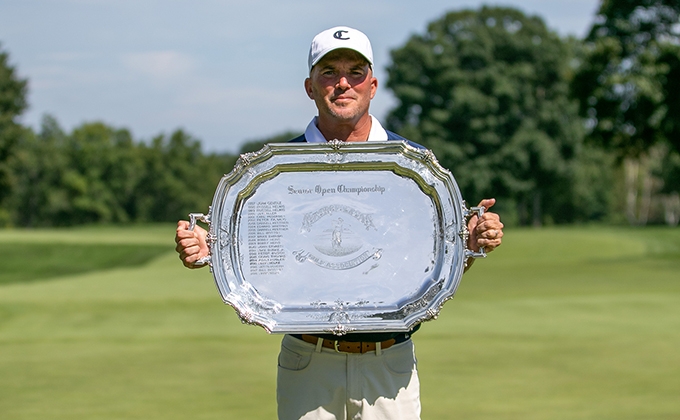 WHITE PLAINS, N.Y. (August 26, 2019) -- Though Shaun Powers admitted the nerves were present down the stretch Tuesday in the final round of the 23rd Callaway MGA Senior Open Championship, no one could tell the wiser with his play as the 50-year-old turned in a 2-under 69 at Metropolis Country Club en route to a two-shot win and his first-ever MGA victory.

Powers, one of the starting field's 11 competitors in their first year of eligibility, began the day one shot behind Jim McGovern of White Beeches, who carded a 6-under 65 on Monday. But, even with the 2016 champion leading the way and a number of past Met Open and Senior Open champions making moves throughout the day, Powers stood up to the test.

"I've had some stretches where I've been playing real well," said Powers of his season, which saw him narrowly miss out on competing in the U.S. Senior Open at Notre Dame as first alternate. "I've been working hard at it and all parts of my game," he continued. "I knew I had some good feels going. I knew I just had to trust myself and just relax. But, I also knew I had to go win the thing. I knew these guys weren't just going to step back."

After an adventurous round one in which he carded seven birdies, an eagle and four bogeys, Powers produced a steadier final round. He opened with four consecutive pars, then made birdie on the par-four fifth, capitalizing on a couple early bogeys from McGovern and jumping to the top spot on the leader board.

Powers played the final five holes in 5-under on Monday and settled in down the stretch once again in the final round, making his own move with birdies on Nos. 14 and 15 to create some breathing room. "I knew after I made that bogey on 12, I knew I had to hit good shots and I did, I hit a lot of great shots coming down the stretch," said Powers.

While he also had quality looks for birdie on each of the final three holes, each bid turned into a routine par and the two-shot victory over Esposito, who birdied Nos. 15 and 18 while also making a bogey on the 17th.

"To beat a field of this quality, with a lot of the top names playing real well, I'm going to take a lot of satisfaction out of it," said Powers, who collects the $5,000 winner's share and gets to add his name to the event's silver platter.

According to Powers, playing alongside McGovern served as a positive pairing for him. "Jim was really really good to me out there. He was very supportive and he's just a classy guy in general." With the victory sealed, McGovern congratulated Powers, somewhat welcoming him to the fraternity of champions in the event. "He just said I went out and won it," said Powers of McGovern's words on the 18th green. "He said I won the tournament. That means a lot coming from a Tour winner."

For Powers, the victory is sweet not only for himself but also for the membership at Fairview, from whom he had already received an outpouring of congratulations. "It's a priviledge to get to represent Fairview Country Club," he said. "They really look after us professionally and personally out there. They enjoy that our staff can play competitive golf and they're really supportive of it."

Esposito finished second at 5-under 137, while Brown and reigning champion Mielke finished at 4-under and 3-under, respectively. McGovern rounded out the top five following his 5-over 76 in the final round.

Dave Scialabba of Meadow Brook and Morten Gotterup of Rumson shared honors for low amateurs, both finishing at 5-over 147. The honor serves as yet another highlight for Gotterup's summer, following he and his son Chris' win in the MGA Father & Son Championship and of course Chris' victory in the 117th Met Amateur at Hudson National.

Metropolis is no stranger to hosting MGA championships, standing as one of 17 clubs to have hosted all three MGA majors -- the Ike, Amateur, and Open. This is the 12th time an MGA champion has been crowned at the club, which last hosted the Ike in 2010. Players raved about Metropolis and its fine conditioning, especially its greens. The course played 6,703 yards as a par 71 for the final round.