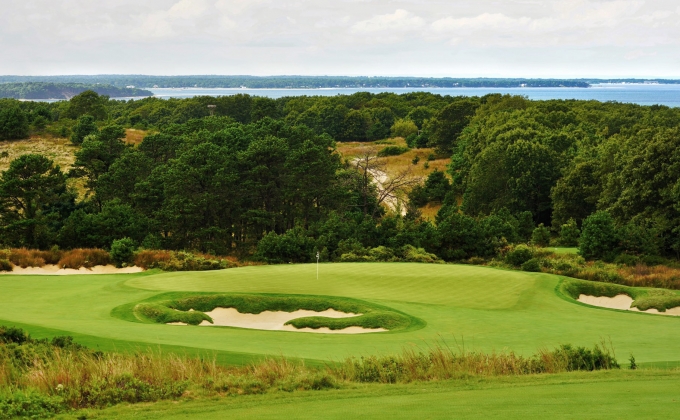 ELMSFORD, N.Y. (May 17, 2021) -- Plenty of excitement surrounds the 66th Ike MGA Stroke Play Championship this year as it prepares to head to The Bridge in Bridgehampton, N.Y., for the first time in its history. The MGA's first major of the year will be the first MGA championship hosted by the club, whose stunning Rees Jones design laid out on the property of the former Bridgehampton Race Circuit, has players eager to advance to the championship proper.

Standing as the Met Area's premier stroke play championship, the Ike has produced thrilling finishes in recent years. Cameron Young of Sleepy Hollow claimed the title in 2015 and 2016, becoming the youngest to win the title at Friar's Head, then out-dueling Peter Kim of Royce Brook at Essex County. In 2017, Matt Lowe of Colonial Springs hoisted the trophy at Century, doing so in record-setting fashion with a closing 10-under 61. In 2018, Michael Graboyes of Watchung Valley closed birdie-birdie at Meadow Brook for a two-stroke win. Dawson Jones closed the deal down the stretch at Canoe Brook, while Mark Costanza provided perhaps the event's most exciting finish by chipping in for eagle on the final hole for a one-shot victory.

Qualifying for the Ike takes place at six qualifying sites between May 17 and June 15.

May 17 - Rye Golf Club, Rye, N.Y.
Field Size: 118 | Qualifying Places: 16 & ties
Darin Goldstein of Deepdale and Adam Pecora of Brookville tied for first place at the Ike Championship qualifier at Rye Golf Club, both shooting 3-under 68s. Goldstein, the 2018 MGA Player of the yYear, closed his round with three birdies in his last five holes. Pecora also finished strong, making three birdies over his final six holes. Seventeen additional competitors qualified with scores of 2-over 73 or better to earn their spot at The Bridge.
Results

May 24 - Bellport Country Club, Bellport, N.Y.
Field Size: 119 | Qualifying Places: 16 & ties
Ben Pirro of Long Island National came out as medalist at Bellport, shooting an impressive 3-under 68 to comfortably lead the field. Pirro, who played collegiately at Xavier University, played alongside Charlie Berridge of Wykagyl  who finished in a two-way tie for second with Lee O’Donnell of Piping Rock Club with rounds of 1-under 70. A total of 19 players advanced to The Bridge with scores of 3-over 74 or better.
Results

May 24 - Rockaway River Country Club, Denville, N.J.
Field Size: 142 | Qualifying Places: 13 & ties
Chris DeJohn of Arcola Country Club, who regained his amateur status in 2020, finished in first place at Rockaway River in the Ike MGA Stroke Play Championship qualifier, shooting an astounding 5-under 67. DeJohn finished his round making five birdies, three of which came on the back nine. There was a tie for second with Thomas Lee of Hudson National, Brett Inserra of Manhattan Woods, and Antoine Chouraqui of Cedar Hill all shooting even par. A total of 14 players qualified with scores of 3-over 75 or better to secure spots at The Bridge.
Results

May 25 - Watchung Valley Golf Club, Watchung, N.J.
Field Size: 142 | Qualifying Places: 19 & ties
Ryan Lee of Blue Hill Golf Association and MGA eClub - New Jersey member Carter Nunez tied for first place at Watchung Valley with impressive 2-under 69s. Lee, who plays at Penn State, made four birdies, three of them on the front nine. Nunez made four birdies and an eagle, with three of his birdies and the eagle coming on the back nine. There was a tie for third between five players who all shot 1-under 70. A total of 29 competitors with scores of 2-over 73 or better will be advancing to the Ike Championship at The Bridge.
Results

June 1 - Garden City Country Club, Garden City, N.Y.
Field Size: 144 | Qualifying Places: 19 & ties
Alex Moller of Sebonack took home medalist honors at Garden City Country Club, shooting 2-under-68 to edge the competition. Moller was in the second earliest group to tee off and maintained his lead throughout despite a strong outing from MGA eClub - Long Island member Kevin Steakin and Matthew Fields of Quaker Ridge who both shot 1-under 69. In all, 24 players shot 3-over or better to advance to The Bridge.
Pairings

June 15 - Country Club at Otterkill, Campbell Hall, N.Y.
Field Size: 108 | Qualifying Places: 14 & ties
Erik Stauderman of Casperkill, a collegiate golfer at St. Bonaventure, shot 3-under 69 to take home medalist honors. MGA eClub - Hudson Valley member Daniel DeLuca, an assistant golf coach at West Point, recorded 2-under 70 with 3 birdies on the back nine. A total of 18 competitors with scores of 75 or better advanced to The Bridge.