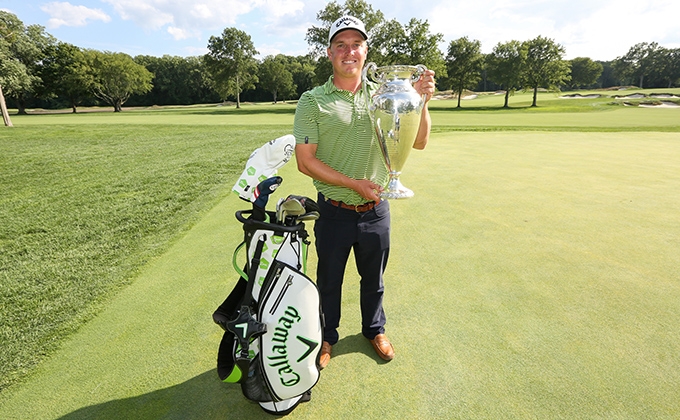 Update: Hear from 102nd Met Open Presented by Callaway champion Josh Rackley in the latest episode of Around the Met!

While Rackley had a rough start with two bogeys over the first three holes, a birdie on the par-three fourth quickly flipped momentum. Three consecutive birdies followed on Nos. 7-9 and propelled Rackley to the top spot at 7-under overall. His second birdie led to a three-way tie atop the leaderboard with Dobyns and Schuster, but Rackley quickly broke the tie thanks to a tight approach shot on the par-four ninth.

Rackley gave one back with a bogey on the par-four 11th, but both Dobyns and Schuster also dropped shots in front of him, eventually both making a pair of bogeys on the way in—Dobyns on Nos. 11 and 14 and Schuster on Nos. 12 and 16.

On the other hand, Rackley converted long-range two-putts on Nos. 12 and 14 before making a smooth up-and-down from in front of the par-three 17th. His steady play down the stretch earned him the two shot cushion headed to the last, though he had no idea where he stood in relation to the field.

“I didn’t scoreboard watch at all,” said Rackley, not wanting others to determine how he attacked the course. “I thought on 18 that I needed to make a birdie, however, everyone was clapping when I came up.”

Rackley cozied his approach inside 10 feet on 18, easily converting par for the two-shot win. For Rackley, his consistent scoring was a product of solid play in all facets of the game, especially down the stretch. “My driver has been great all week—great for a few months now—so I put a lot of my faith into that and just tried to hit fairways,” he said. “If you miss the fairway, it has to be in the rough, you can’t go in these fairway bunkers. I only went in one fairway bunker all week and it was today on 11 and I had to pretty much punch out.”

In addition to the driver, Rackley’s irons and the putter were locked in as he chased down the title. “I felt really comfortable on the greens today,” he continued. “I hit the ball ok on the front nine but I made a couple putts. On the back nine I hit it best all week and I didn’t make any birdies but you have to hit it good on 16-17-18—three very very tough finishing holes.”

Though Rackley is just in his second season at Tam O’Shanter, he had an up-close look at the Met Open last year, serving as caddie for champion Mark Brown at Glen Oaks. And, even as a proven winner himself—including the 2015 Haverford Philadelphia PGA Classic—the experience still gave Rackley insight to the competition in the Met Area’s premiere open championship. “He showed me how to play without fear, and how to win this golf tournament,” said Rackley. “That’s what puts the biggest smile on my face. We get to keep the trophy at Tam. I told the members all week that as long as one of us wins, we’ll be happy. I’m glad I could play my heart out today and we get to keep the trophy at Tam O’Shanter.”

Schuster made a strong start with four birdies over his first 10 holes, but fell off the pace with his two bogeys, while Dobyns also made a climb with two early birdies, before posting his two bogeys on the way in. Balin’s 4-under 67 propelled him into the three-way tie for second.

Young began his round with a bogey, but added four birdies the rest of the way for a 3-under 68 to catch Nicholas—who carded an even-par 71 in the final round—and share low amateur honors. Young finished as solo low amateur in both 2015 and 2016. Hall matched the low round of the championship with his 6-under 65 Thursday, carding eight birdies and two bogeys on the day.

Max Buckley of Westchester Country Club and Sean Quinlivan of Piping Rock finished tied eighth at 2-under 211, while Mark McCormick of Suburban, Patrick Clark of Wee Burn, and 2016 MGA Player of the Year Stewart Hagestad tied 10th and rounded out those finishing under-par, shooting 1-under 212 for the championship.

Competitors were thrilled with the outstanding layout and conditioning at Hollywood Golf Club, which last hosted the Met Open in 1991 and also welcomed the Met Amateur back in 2012—just before a 2013-14 restoration project which focused on its bunkers. Though relatively open, the Walter Travis gem demands accuracy off the tee if players aim to take on its undulating greens.

The top 25 finishers are exempt into the 103rd Met Open, which will take place Wykagyl Country Club in New Rochelle, N.Y.