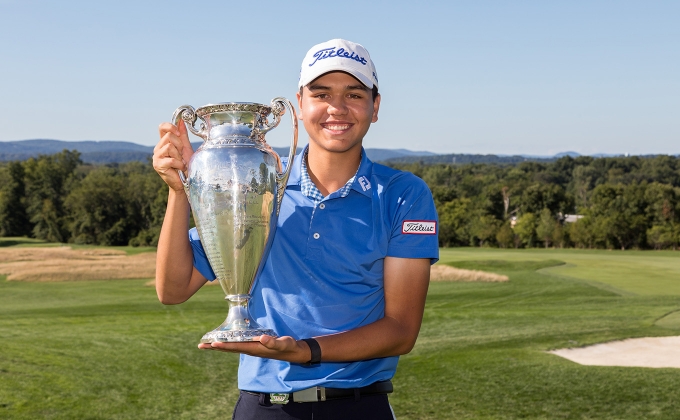 WEST CALDWELL, N.J. (August 20, 2020) - Luke Sample of Old Oaks stole the show during Thursday’s final round, shooting a 3-under 68 to win the 105th Met Open Championship Presented by Callaway to become just the 8th amateur in the championship’s history to do so. Sample, 17, also becomes the youngest player to ever win the Met Open, shattering the record previously held by Johnson Wagner when he won as an amateur at 21. He’s also the first amateur to win in 15 years, since John Stotlz won at Old Westbury.

Sample started his final round two shots off Gore’s 7-under lead and in the penultimate pairing thanks to two under-par rounds of 69-68. After a messy double bogey on the par-3 fourth hole, he bounced back with a par on No. 5, and then began a birdie barrage to jump to the top of the leaderboard. “It was a frustrating one for sure, [the tee shot on four] was probably my least committed swing of the week, and it wasn’t an easy par from where I left myself, and it also wasn’t an easy bogey. Unfortunately I walked away with a double but Cole [Ekert, his caddie] kept me in there once again, he did such a great job of keeping me positive and not letting me go sideways this week,” he said.

“We hit the reset button on the next hole and almost holed it from the fairway, and ended up making par unfortunately. Once six rolled around we said we have two par-5s coming up, let’s at least birdie the par-5s and get to the back nine and make a run there.”

Sample did birdie the par-5 sixth, but didn’t stop there. He kept his birdie streak going on Nos. 7, 8, and the par-5 9th to take a two shot lead. “I said it yesterday, I’d been kind of waiting for the putts to roll in and the approach shots finishing closer than 15-20 feet, and I finally got a couple that finished at 3 or 4 feet, and had a couple of kick-in birdies,” Sample said.

“Cole once again helped me pick some great targets. The one into 8 was really just a lucky break to hit it to within 2, 3, feet, and I had no business going at that pin. I hit a pretty hard push to the right and just happened to finish two feet from the hole. Those are the kind of breaks you need in a tournament like this.”

On the 505-yard ninth, his chip from about 20 feet short of the green nearly went in, but he settled for a tap-in birdie. “I had a very similar pitch shot into nine yesterday, which was my final hole, and pretty much just hit the same exact shot, but this time I converted for birdie which was helpful going to the back,” he shared.

Sample started off the back nine with his fifth consecutive birdie on no. 10. “I told Cole going to the back nine, if we get one or two more, I think two definitely, it gives me a really good chance to run away with this, but I also said we don’t need to force anything because people can still go backwards and there’s no need to put myself in a hole I don’t need to be in.”

On the par-4 12th, he played aggressively and sent his drive nearly 50 yards past where other competitors had been placing their tee shots. “I got to 12, and I think most people have been laying up back there and hitting a long iron or a three-wood off that tee, and I just kind of felt like we should keep the momentum going and just went full send on a driver, and it worked out,” Sample said. It worked out just fine – his second shot got him to within two feet for this sixth birdie of the day.

Through 12, he was 9-under and four shots clear of the rest of the field. Meanwhile, 2015 champion Ben Polland of Deepdale was finished with his round and in the clubhouse with at 5-under and what turned out to be the low round of the day with a 67, due to four birdies in his final round and no bogeys on the card. Fairview’s Paul Pastore was making a run and got to 6-under through 11, but he then struggled with back-to-back bogeys on 13 and 14. A birdie on 17 brought him at 5-under, matching Polland’s score.

Michael Graboyes of Watchung Valley and Jay Card of Gardiner’s Bay both finished with 3-under totals and matching rounds of 71-69-70. Graboyes had four consecutive birdies of his own on 6-9, and had two more on the back, struggled with bogeys on Nos. 13, 16, and 18.

By this point, Sample had recovered from a bogey on the par-3 14th, after two putting from the front of the green of the 15th. He kept his play consistent the rest of the way in with pars, finishing his back nine at 1-under to sign for a final round 3-under 68 and the win.

Second round leader Jason Gore of Hamilton Farm was in the final pairing but struggled with three bogeys early on his final round. A birdie on nine helped the scorecard, but a double on the par-4 13th set him back a couple more shots. He birdied 18 for the second consecutive day to finish with a 3-over 74, bringing him to 4-under and a T4 finish in his first Met Open.

Also finishing at 4-under was Steve Shellock of Suneagles, who put together rounds of 70-70-69 this week. Shellock grabbed the lead early on during the final round thanks to birdies on Nos. 2, 3, and 6 to make the turn at 3-under. He only recorded one bogey, on 14, but kept his round under-par for the third-straight day.

With his win, Sample becomes just the eighth amateur in the championship’s 105 year history to add his name to the Walker L. Trammell trophy. “There are some pretty spectacular winners on there. I don’t think its quite set in yet and it might not for a while, but hopefully this isn’t the last time I get to put my name on there, and just being able to be a part of that history is really special,” he said.

Sample has had a spectacular summer of golf. In July, he qualified for both the 118th Met Amateur and 65th Ike MGA Stroke Play championships at a join qualifier at New Jersey National. That same afternoon, he went on to Rockaway River to begin his run to the 103rd Met Junior title, which he won on July 15. Later that month, he qualified for the Met Open with a 4-under at Cherry Valley (N.J.), and two days later finished in third place at the MGA Carter Cup at Canoe Brook (where his caddie, Cole Ekert, finished as the runner-up). With not one day of rest in between, he headed to Bethpage Black for the 118th Met Amateur. He advanced to the finals, and after a great stretch of golf was defeated by champion Jack Wall.

After the Met Amateur, Sample finished in the top-10 at the Ike at Darien just last week, but also found time to practice for Mountain Ridge. “I went to work on some chipping and pitching and then started working hard on the putting again. I got the putting back again this week to where I felt like I was at the Met Junior, which was really big,” he said.

Sample held off a number of other top players for his win, including Casey Pyne of Stanwich, who he was paired with today. Pyne shot a final round 75 to finish at 1-under for the week, along with Ethan Ng (a) of Knickerbocker, Sam Goldenring (a) of Brooklake, Pat Fillian of Echo Lake, and Luke Graboyes of Wachung Valley.

Headed into his senior year the Trevor Day School in Manhattan and already verbally committed to play at Duke, Sample can proudly say he had a successful summer of golf, capped off by a record breaking win at Mountain Ridge. “It means everything. Last year [at Piping Rock] I thought I played some amazing golf, and finished, I think, outside of the top 30, and to be able to come back from that a little bit of heart break at the Met Am, and just show myself and show everybody that I can compete at whatever level that I’m put against, it means everything."

Moutain Ridge was once again the ultimate host for the club’s fourth Met Open Championship. Previous Met Opens at Mountain Ridge were won by Tom Nieporte (1966), George Zahringer, another amateur winner (1985), and Mike Gilmore (2000). Since last hosting the Met Open in 2000, the classic Donald Ross layout has gone through extensive changes, highlighted by tree removal and restoration work led by architect Ron Prichard. Superintendent Cliff Moore and his staff had the course in supreme condition to challenge this year’s competitors.

The top 25 players from this year’s championship are exempt into the 106th Met Open Championship, to be played at Hudson National Golf Club.