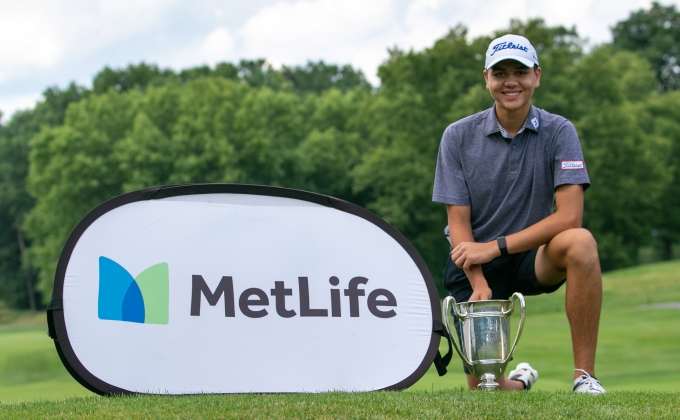 DENVILLE, N.J. (July 15, 2020) -- Using motivation from his runner-up finish last year, Luke Sample of New York, N.Y., rose to the occasion on Wednesday afternoon and claimed the 103rd Met Junior Championship Sponsored by MetLife at Rockaway River Country Club. A 10-foot birdie putt on the par-4 16th clinched the 3-and-2 victory for Sample over James Allen of Scarsdale, N.Y.

Sample started the day with a strong performance, ousting Cole Ekert of Chatham, N.J., by a 5-and-4 margin.

"I think it was really good to start out hot and it was a confidence boost to see the ball tracking the way I wanted to early," said Sample, who rolled in birdies on Nos. 2-5 and added another on No. 8 to take a 5-up advantage. He and Ekert tied the next six holes as Sample punched his ticket to the final for the second consecutive year.

In the afternoon, Allen—who defeated Tyler Lee of Franklin Lakes, N.J., 3-and-1 in the morning—took a 1-up lead through six holes, as he capitalized on a couple early miscues around the greens from Sample. The pair tied the par-4 seventh with birdies, and Sample knocked in another birdie-three on the eighth from around 10 feet. The putt, from just off the green, seemingly sparked Sample's scrambling game and led to a strong finish down the stretch for the 17-year-old.

"It was huge," said Sample of the putt. "Truth be told, had it not hit the hole, it probably would have gone six or seven feet by, but it takes a couple breaks to win in these matches, especially against such a great player like James. That was definitely one that really helped me."

Sample had another big up-and-down on the par-4 10th after finding the bunker behind the green. "It was a mental mistake, frankly, to put it in that bunker," said Sample. "I shouldn’t have been anywhere near that pin." But, the sand save placed Sample 1-up as Allen made bogey. After three consecutive ties with par, Allen made bogey on the par-3 14th and conceded Sample's birdie to fall two holes behind.

Sample closed it out in style on 16 with his birdie putt, making him proud of how that aspect of his game developed through the week.

"Putting wasn’t my best early in the week," Sample admitted. "I switched putters after stroke play, but to see it kind of slowly come together and to lock it up at the end was really nice to see."

Sample can see the difference that a year has made, saying that he gave away fewer shots in this year's championships en route to hoisting the Mandeville Trophy.

"This event has been circled for me since that day and it means a lot to come back and win it this year," he said. With the victory, Sample becomes the 11th player in MGA history to win the MGA/MetLife Boys and Met Junior in their career, having claimed the 50th MGA Boys title in 2018.

The victory capped off an exciting week for Sample. On Monday, he shot 1-over 73 at New Jersey National to qualify for both the 118th Met Amateur and 65th Ike MGA Stroke Play Championship. From there, he went on to Rockaway River to begin his run to the Met Junior title.

With the win, Sample will also receive 250 points in the race for the MGA Junior Player of the Year Award, Presented by Callaway. The award was established in conjunction with the 100th Met Junior in 2017 to recognize excellence among junior competitors in the Met Area.

Rockaway River once again acted as an impressive host for the Met Junior Championship, which it welcomed for a record 13th time. Despite a dry, hot summer so far, the course was in outstanding condition and served as a true test from tee to green while the layout added excitement in the match play format.