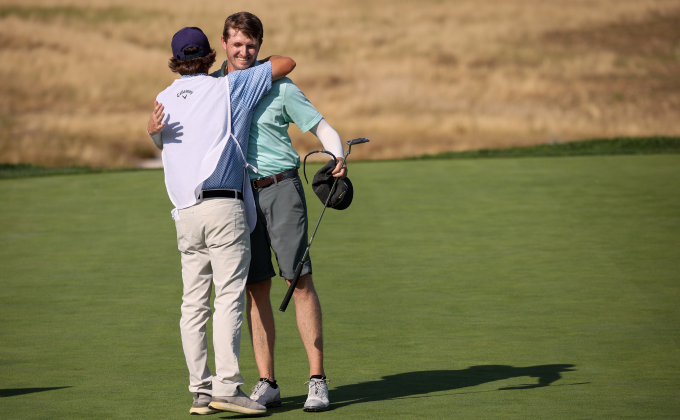 FARMINGDALE, N.Y. (August 25, 2022) -- Ryan Siegler of TPC Jasna Polana birdied two of his last three holes to capture the 107th Met Open Championship presented by Callaway at Bethpage Black. Siegler started the day three strokes ahead of the field, winning by the same margin. Despite a 5-over 76 in the final round, the 28-year-old was able to outlast a stacked field at Bethpage, finishing the three-day, 54-hole championship with a 4-under 209 total.

“It means a lot to me,” said Siegler. “This tournament has been around for so long and you see all of the past winners, I’m excited to add my name to the list. It’s also a story of believing in myself and getting better. I played in a lot of these MGA events and as an amateur never really contended. To come out on top is a great feeling.”

After playing the first 16 holes of the final round in 7-over, Siegler missed his tee shot left on the par-4 16th. From a partially obstructed view, he lofted his approach just over the tree to 12 feet behind the flag.

“That’s a tough tee shot for me, especially with the wind working off the right. I had to hit a high cut around the tree and luckily that’s my go to shot," said Siegler of his approach shot. "I felt like I had a good number and was able to leave myself a makeable putt. We got a good read on it and to see it drip in the front edge was a good feeling.”

A clutch up-and-down on the 17th left him with a two shot lead with one to play. Siegler said it was a nasty lie and he was happy to leave himself a five-footer for par. After another miss left off the 18th tee, Siegler hit the shot of the day from the fairway bunker.

“I was lucky to not be too close to the lip in that bunker,” said Siegler. “It made the decision easy, I just took a nine iron and was aiming for the middle of the green. I pulled it right at the flag and got a few cheers from the crowd when it landed close, it was unintentional but worked out really well."

All that was left for Siegler was to tap in his birdie look.

Despite the early struggles, Siegler said he did draw off a few clutch putts that helped steady him.

“Putter if anything has kind of been a weakness for me as I have played professionally,” said Siegler. “I might not make the 20-footers, but I pride myself on making the ones I need to make. It settled me down a bit to make those putts and know that I didn’t have my best stuff but can still hang on this course.”

Bethpage Black showed its challenge during the final round, with Josh Goldenberg of Atlantic (-1/70) and Cian Curley of Noyac (-4/67) as the only two of the 55 remaining players to break par. David Pastore of the Golf Performance Center, Tom Lovelady of Silo Ridge, Michael Graboyes of Watchung Valley, and Max Greyserman of Hamilton Farm tied for second place, all finishing at 1-under 212.

Dylan Newman of Brae Burn got within one of the lead, but couldn’t catch Siegler in the end, finishing at even par for the tournament. Newman’s second round 64 was the second-lowest round of the tournament, bested only by Siegler’s second-round 63. The second round for Siegler tied the course record at the Black, matching Brooks Koepka's 63 from the 2019 PGA Championship.

“I don’t know if it’s set in yet,” said Siegler. “It will be really cool to look back at that. After the round I didn’t know it was official right away and it will be pretty cool to see my name up there.”

Even though Siegler isn’t from Long Island, the Black Course is familiar territory for the Townson University grad. His dad grew up ten minutes from the course and for the duration of the week, Siegler was sleeping at his grandfather’s house.

“It was really cool,” said Siegler. “My dad grew up in a house right around here and from Princeton, New Jersey, it’s a bit of a hike out here, so it was cool to have that. The support was also great, some people came from the Princeton area and to have them with me was special.”

Siegler joins a list of esteemed champions to have won the Met Open at Bethpage's famed Black Course: Bob Rittberger (2010), Johnson Wagner (2001), and Bobby Heins (1989). He will take home the largest winner’s share in Met Open history, securing $36,500. In 2022, the purse increased from $150,000 to $200,000, elevating the always exciting opportunity for professionals and is thanks to continued support from MGA partners, including championship partner Callaway Golf.

The win for Siegler is his first MGA championship and according to the Princeton, N.J., native, a big one for him personally.

“It’s really tough because every bad shot is punished,” said Siegler. “It’s also tough when you sleep on the lead. You sleep a little less and you eat a little less. I was nervous coming into the day because I knew this win would change the trajectory of how my year has gone. It was a long 36-hours from when I finished the second round, but it was worth it.”

“I’ve played well all year, and I’ve had leads going into final rounds that I just haven’t closed out. In a year where I don’t have status on the Korn Ferry Tour, this is the biggest event I’ll play in all year and to come out on top is great.”

Matt Lowe of Bethpage took home low amateur honors with a three-round total of 2-over 215. He was steady all week, carding scores of 73-70-72.

The Met Open will head back to Siegler’s home state next season, as the best in the area will take on Arcola Country Club in Paramus, N.J. Arcola was recently stroke play co-host for the 122nd U.S. Amateur. The top 25 finishers from Bethpage will be exempt into the 2023 championship.