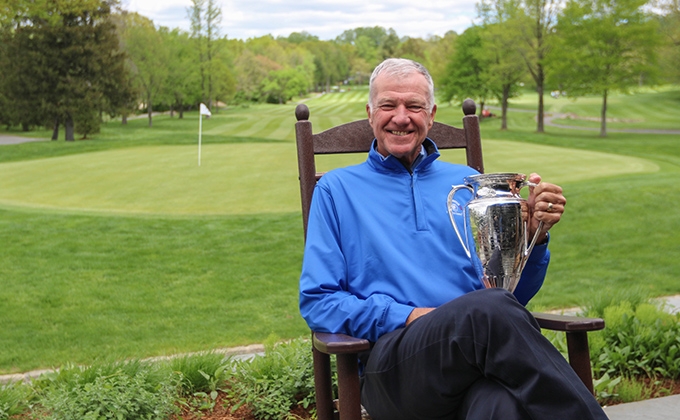 CHATHAM, N.J. (May 3, 2017) – While a number of competitors grabbed at least a share of the lead during Wednesday’s final round of the 90th MGA Senior Amateur Championship, it was host Fairmount Country Club’s very own Allan Small who rose to the top to claim the Horace L. Hotchkiss trophy. Small fired an even-par 72 in the final round, tallying a two-over 146 tournament total to earn the title for the second time in his career.

“It’s unbelievable how much it means to me,” said Small who has more than 30 combined club championships at Fairmount in stroke and match play formats. “I helped get the event here at Fairmount back when I was president of the MGA. To come here and win it is just special. With all the other good things that have happened here, it’s just icing on top of it all.”

Though winds provided an extra challenge for the second straight day, Small played steadily all day long, registering one bogey and one birdie along with 16 pars. “I bogeyed number two, but after that I didn’t miss a green. I had birdie putts inside 20 feet on every hole after that. I got one to fall on nine, and that was it. I hit the ball so well and felt like I rolled it well.” Small played the ninth to perfection, piping a drive to the fairway’s narrowest portion and hitting his approach from inside 100 yards to just six feet. His birdie pulled him square with Zahringer at that point and just one shot off the lead, which was still held by first round leader Marc Coleman of Nassau Players Club.

Zahringer and Blumenfeld both hovered around the lead throughout the day, though Small remained focused on his own game and didn’t ask how he stood until his final hole. At that point, Small held a one-shot lead over Zahringer. He easily found the green in two on the challenging closer and safely two-putt for the win, knowing Zahringer had bogeyed the last in front of him.

“I didn’t want to let them come into my home turf and beat me, so that was my main motivation today and it all worked out well,” closed Small.

Zahringer, who was looking to join J. Wolcott Brown as the only player to win the title in three consecutive years, began the day with two early bogeys but added birdies on Nos. 7 and 9 to turn in even par. Zahringer, Coleman and Small stood tied with just several holes to play, but Small’s steady finish (even par for his final nine) clinched the title. Meanwhile, Zahringer and Coleman played their final nines in two and four-over, respectively.

Coleman tallied a final round 79 to finish fourth at six-over 150, though his opening round 71 stood as the championship’s sole sub-par score. Jay Sessa of Gardiners Bay Country Club shot 75 en route to a seven-over 151 and fifth-place honors and Steve Doh of Haworth claimed solo sixth after rounds of 74-78. Edward Bugniazet of Winged Foot, Drew Greenland of Rockrimmon, Randy Riley of Baltusrol, and Jim Craffey, Jr. of Arcola rounded out the top-10 finishers at nine-over 153.