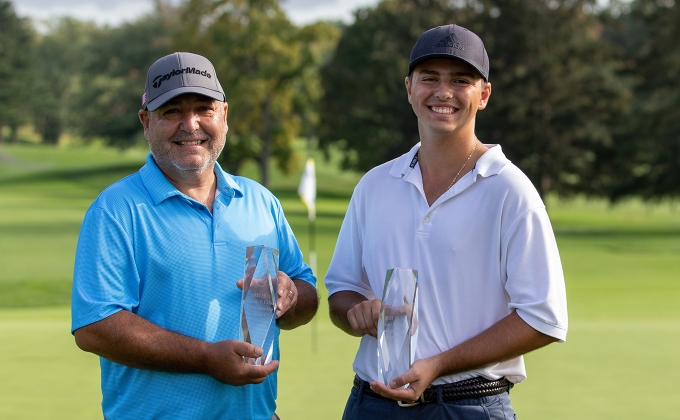 “I think we came into this with the idea of just having fun,” said Rocco, 54. “We were in the Father-Son earlier this year at Tamarack and had a good time, so we signed up for this one. We just happened to get a couple putts that fell in and it worked out well.”

The duo overcame five net bogeys on the day by also rolling in four net eagles as well as six net birdies en route to their 63, which edged Tom and Christopher Roden of Bethpage State Park by one shot.

For the two, the victory was icing on the cake of enjoying quality time together on the course.

“I’m grateful for the chance that I’m able to be here today,” said Christopher, who just picked up the game a couple of years ago. “This opportunity to play out here, I couldn’t pass it up. So, I’m really grateful for this chance to get out here and shoot a great score with my dad.”

“We enjoyed the time out here,” said Rocco. “It gives us a lot of time spent together. Being the inaugural winners of the event, we’ll take that with us for a long time.”

Sean Gordon and Thomas Gordon of Eisenhower Park and Kings Park Golf Association and Neil and Zach Zola of Quaker Ridge both carded net rounds of 5-under 66. Gary and Gary Cohan of Nassau Players and Bethpage State Park, Matthew Zuntag and William Zuntag of Silver Lake Men’s Golf Club and Drew Berger and Eric Berger of Griff Harris all posted 3-under 68s to round out the top-5 net scores on the day.

This was the first playing of the Parent-Child Championship, a rebranding of the former Father-Son Net Tournament that opens the field to additional family combinations. Competitors enjoyed the day at Pine Hollow Club, a 1958 William Mitchell layout that was redesigned by Gil Hanse in 1997.