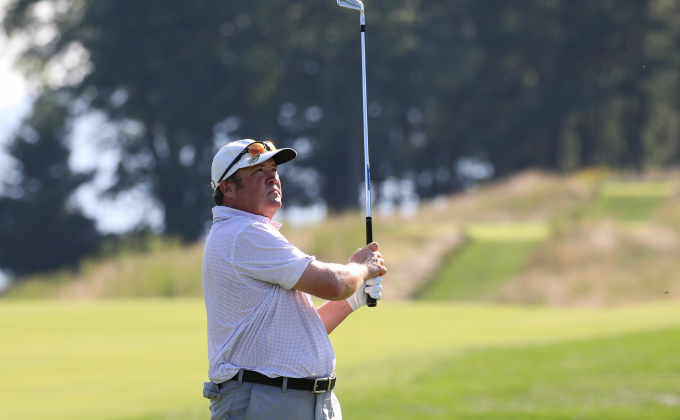 CROTON-ON-HUDSON, N.Y. (August 25, 2021) -- Andrew Svoboda of Engineers continued his strong play at the 106th Met Open Championship presented by Callaway, carding a 3-under 67 to take a one shot lead into Thursday's final round of the tournament. Once again, Svoboda methodically plotted his way around Hudson National Golf Club, giving himself plenty of birdie looks during the round. Not only was he able to cash in on his chances, but through 36 holes the two-time Met Open champion has made just two bogeys.

"I've been playing well all week," said Svoboda. "I had a couple putts that didn't drop today and the two bogeys, but I was still happy with my round."

Playing alongside five-time MGA Major Champion Johnson Wagner of Hudson National and PGA Tour winner Jason Gore of Hamilton Farm the last two days, Svoboda, who sits at 8-under, has put on a show that has even impressed those two.

"I've played a lot of golf with Andy," said Wagner. "I told him today that I think this is the best that I've ever seen him hit the ball."

On a course where every aspect of the game is tested, Svoboda has not shown many flaws in his first 36 holes. Still, with David Pastore of Golf Performance Center lurking just one stroke behind him, Svoboda said he doesn't plan on changing much in his approach.

"I'm still going to have to go out there tomorrow and be agressive," said Svoboda. "You have to hit fairways here and I've been able to do that so far and make some putts."

Pastore led the field after Wednesday's morning wave completed play and will be in the final pairing after finishing the first two rounds at 7-under. A quick start was the key to Pastore's 4-under second round.

"My goal was to get to the same number I did yesterday," said Pastore. "I made a few putts early in the round to get into things and even though I made a bogey on 18 that's a tough hole so I'm not that discouraged by it."

Pastore got the ball rolling early with a birdie on the par-three second. He drained a long birdie putt from the front of the fifth green before tapping in for birdie on the par-five sixth. The blemish on 18 was his only bogey of the round as he added two birdies on Nos. 15 and 16 to post his second quality round of the tournament.

Del Ponchock of Hudson National and Tom Lovelady of Silo Ridge found different routes towards the same final score, 4-under through two rounds of play. Ponchock caught fire late in his round, draining four consecutive birdies between holes 14-17. Ponchock's putter was the key to success during that stretch.

"After the first two birdies I knew that 17 was a gettable hole and with the front pin on 16, I knew I could put something relatively close," said Ponchock. "I didn't really get it going until late in the round but I was happy with the finish."

Like Pastore, Ponchock also made bogey finishing his round on 18. Lovelady started off slow with a bogey on the first and, despite not hitting the ball well, still found a way to finish under par, carding a 1-under 69 in his second round.

"I had a huge par save on three that helped me a lot," said Lovelady. "For how I hit the ball today I was happy to be under par. Confidence is good going into tomorrow and i'm just hoping I can hit it like I did in round one."

First-round leader Matt Dobyns fell off the pace with a 3-over 73 on Wednesday, and sits tied for fifth alongside amateur Jack Wall of Manasquan River at 3-under. Wall, who advanced to match play in the 2019 Met Amateur at Hudson National and was the runner-up and low amateur in the 2018 Met Open at Wykagyl, carded six birdies on the day to shoot 1-under 69 and overcome a 5-over stretch on Nos. 16-1 as he made the turn.

Amateur Austin Devereux of Spring Lake submitted the day's low round, shooting 5-under 65 in the morning. Finishing on the front nine, Devereaux closed in 5-under 31 and made birdies on four of his final five holes.

A total of 61 players made the cut, with 6-over as the final cut line. Fifteen players are currently under par, with just three within four strokes of the leader Svoboda.