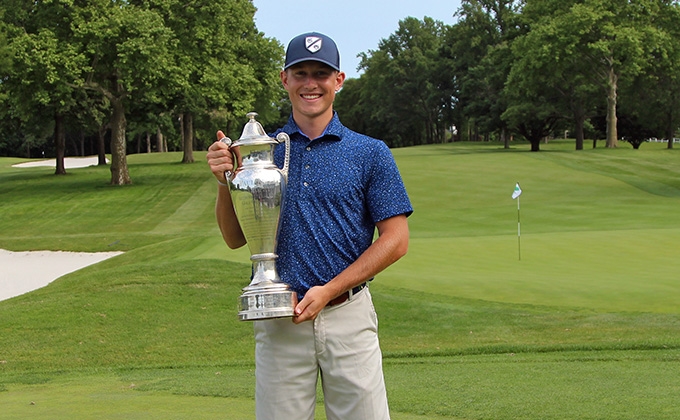 FAIRFIELD, Conn. (June 7, 2018) – The 36-hole championship match in the 99th Westchester Amateur did not disappoint on Thursday at Brooklawn Country Club, as the top two seeds battled down to the wire, but it was reigning titlist Christian Cavaliere of Mahopac who claimed victory, 2-and-1, over Gray Barnes of Centennial.

Senior and Super Senior champions were also crowned, as Tom Yellin of Stanwich and Rick Blank of Metropolis won their respective brackets.

Cavaliere overcame early struggles in the morning round as Barnes built a 2-up advantage with a birdie-three on the fourth. However, the rising Boston College junior responded with his first birdie of the day and when both found trouble on the par-five 7th, Cavaliere squared the match despite scoring a six.

A 15-foot par save on the par-five 8th maintained momentum for Cavaliere, while his wedge play helped produce wins on the next three holes—which included birdies on both 10-11.

“The morning was just a grind,” said the 20-year-old Cavaliere. “It was just who could make it up and down and who could make putts. So really, my short game, wedge play and my putting kept me in it.”

A near hole-out from the rough on the 13th added another birdie for Cavaliere. While Barnes took advantage of a pair of Cavaliere miscues on Nos. 15 and 16 to trim the deficit to one, a par-four on the 18th gave Cavaliere a 2-up lead heading into the afternoon.

Cavaliere built his advantage to four after winning two of the first four holes after lunch. Barnes showed his determination down the stretch by scoring three birdies in a seven-hole stretch, but Cavaliere immediately answered two of those with birdies of his own, not allowing Barnes to get any closer than two holes down. Barnes’ final birdie came on the par-four 16th, while halving pars on the 17th—and 35th overall hole—closed out the match in Cavaliere’s favor.

“I knew if I just put myself in good spots and just kept making pars that it would work out,” said Cavaliere, who stuck to his game plan through the week and proved to be a strong closer once earning a lead. “It’s awesome to defend. I love this event and it’s always one of the most fun of the year, so it’s a great honor to have won it back to back.”

Cavaliere is the first to win the event in consecutive years since Greg Rohlf did so from 1997-1999. Next year, the Westchester Amateur will celebrate its 100th playing at Winged Foot Golf Club.

Meanwhile, Yellin earned a 4-and-3 victory over Frank Geiger of Sterling Farms to win the Senior Amateur. Yellin, who won the 1991 Westchester Amateur, used three consecutive pars to quickly extend a 1-up lead to 4-up through 12 holes. A par-three on the 15th sealed the match for Yellin, who was determined to claim the title despite battling lower back pain.

Though Yellin turned 65 in January and was eligible to compete in the Super Senior Amateur, he remained focused on the Senior title. “I just said, ‘I want to win this.’ And, I’ll defend next year, but after that, I want to win all three.” Yellin joins Joe Sommers (2000/2011) as the only competitor to win both the Westchester Amateur and Senior Amateur titles. No player has ever claimed all three during the span of their career.

Blank—making his second straight appearance in the final—and John Hamilton of Hudson National went the distance in the Super Senior championship match. After halving the first six holes, Hamilton used birdies on Nos. 7 and 9 to take a 2-up lead. The final nine went back-and-forth, though, with Blank taking the next four holes, only to see Hamilton win the next two to square the match through 16. Blank reclaimed the lead with a par on the 17th, then closed out the match with par on the finisher to earn the title.