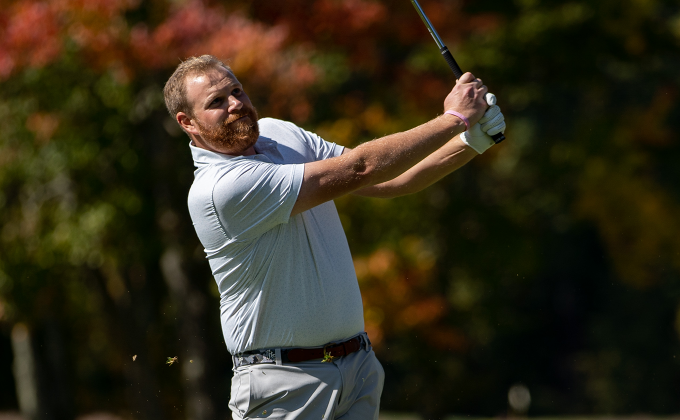 TUXEDO PARK, N.Y. (October 11, 2022) – Pat Wilson of Hamilton Farm carded a 3-under 68, Tuesday at The Tuxedo Club and will take a three-shot lead into Wednesday’s final round of the 16th MGA Mid-Amateur Championship.

Wilson opened with a bogey on the challenging blind tee-shot opener, but kept a clean card the rest of the way while also adding four birdies.

“The pins were really tough,” said Wilson, the 2013 Met Amateur champion who’s making his first start in the Mid-Am. “The greens were firm as can be and super fast. Thankfully the conditions were favorable, but [the greens] are small targets and you have to hit good shots.”

Wilson took advantage of the par fives, making birdie on two of the three, including the closing 18th, where he hit his second shot over the green and showed a good touch around the greens by chipping within a foot. Overall, Wilson kept himself in the right spots and capitalized when he could.

“There were a lot of two-putts,” said Wilson. There’s a lot of hitting it below the hole in the right spot and kind of being okay with having 25-30 feet and just trying to two-putt some of those.”

Wilson hadn’t played the layout recently and after today’s round is looking forward to a similar game plan in Wednesday’s final round.

“Today I was just trying to play a good round and stay in it,” said Wilson. “I’ll just try to play the same way I did today. I’ll take less than driver off the tee and try to hit it as close as I can when I can, but 30 feet is ok.”

While Riley turned in 4-over 39, he made three consecutive birdies on Nos. 12-14 and added a final circle to his card on the par-4 16th, to claw back to even-par. Biggadike also kept the squares off his final nine holes, making birdie on the par-4 12th to go along with nine pars en route to nines of 36-35 for his 71.

Many players, including Tilley, were getting their first look at the course, which requires precision from tee to green and demands an especially good touch around the greens.

“Now I can have a game plan because I’ve seen the course,” said Tilley, who was one of the day’s earlier groups. “So, I’ll try to figure that out tonight and put a low one up tomorrow and see if I can move up and be in contention.”

James Delaraba of Hempstead, Matt Rawitzer of Young Benefactors, and 2017 champion Darin Goldstein of Deepdale round out day one’s top-10, sitting tied for ninth with 2-over 73s.

As a founding member of the MGA, The Tuxedo Club has been a longtime supporter of the MGA and its championships. The MGA Mid-Amateur is the record 10th different MGA event hosted by the Club. The course recently underwent several changes overseen by Rees Jones. In addition to redesigning the ninth hole, the work focused on improving bunkers and repositioning fairway bunkers for today’s game.

Following the opening round, a cut was made to the low 40 scores and ties, with 52 players making the cut with scores of 8-over 79 or better.