Women's Met Amateur Victory Comes in a Playoff for Amoruso

Women's Met Amateur Victory Comes in a Playoff for Amoruso 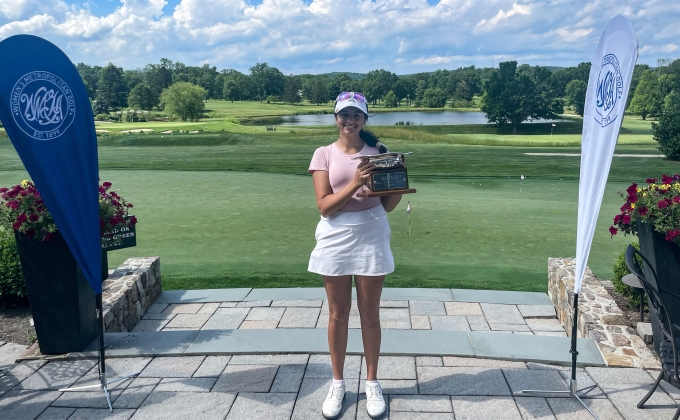 MENDHAM, N.J. (June 13, 2022) -- The WMGA/MGA Women’s Met Amateur at Mendham Golf and Tennis Club saw Lianna Amoruso take home the title. With multiple former WMGA/MGA champions such as Ava Lozito, Ina Kim, and Paige Diecidue in the field, Amoruso grabbed the headlines as she shot 2-over 74, earning her way into a playoff where she eventually triumphed.

Amoruso, who plays out of Fairview, played her first 11 holes in 5-over par, but a remarkable final seven holes that included birdies on Nos. 13, 15, and 17 brought her in as the leader in the clubhouse. As Amoruso waited for the rest of the field to finish play, she tried her best to relax in the clubhouse, saying “I was just sitting and watching the scoreboard and trying to stay calm.” She gave much credit to her mental game which was the key to her calmness during her wait. “I had a really good mental day today, so I was just trying to keep that going," said Amoruso. "I told myself whatever happens, happens and that I gave it my all no matter what.”

Defending champion Paige Diecidue also posted 2-over 74 to force the playoff, in which Amoruso carried her positive attitude. “I knew I didn’t sabotage myself or have any unsteady moments all day, so I used that for confidence in the playoff and it paid off,” said Amoruso.

After both players made par on the par-5 10th hole and the par-3 12th hole, the playoff continued on the par-4 first hole. Amoruso and Diecidue found themselves with lengthy putts for par, and after Diecidue’s try just slid by the hole, the stage was set for Amoruso. She knocked in her 20-footer to claim the victory and put an exclamation point on her clutch performance. Her emotions were at an all time high following the victory. “When I saw the putt curving towards the hole, I was just saying ‘please go in’ and when it finally did, I was so excited," she explained,"

The gravity of the moment was astounding for Amoruso as she took down defending champion, Diecidue. “I’m kind of a late bloomer for golf and I hadn’t realized that she was the defending champion until after the fact, so getting this kind of validation and being able to play this well is awesome," she closed.