History of The Tuxedo Club

History of The Tuxedo Club

ELMSFORD, N.Y. (February 23, 2016) - As we continue to delve into the histories of our MGA member clubs, we turn our focus towards the Tuxedo Club in Tuxedo Park, N.Y.

The beginning of the Tuxedo Club dates back to 1886 when two men boarded a train to the top of the ridge in the Ramapo Hills of Orange County, overlooking what would become Tuxedo Lake. One man was Pierre Lorillard, great grandson of tobacco tycoon Peter Lorillard, the other was architect Bruce Price. Together, they would develop the area into one of the most exclusive sporting communities in the country, originally focusing on hunting and fishing.

After its construction, Tuxedo Park, as it was called, consisted of 22 turreted cottages, two blocks of stores, a beautiful clubhouse, a 9-hole golf course, a race track and a mile-long toboggan slide. To no surprise, Tuxedo Park became a fashionable and popular space for New York's social elite, highlighting the social scene  with their highly acclaimed Autumn Ball, in 1886, which also saw the first appearance of the tail-less dinner jacket soon to become known as the "tuxedo." 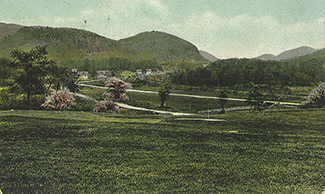 The members soon expressed their need for a more sophisticated golf course, and turned to their friends in Montreal for help, as Dr. E.C. Rushmore did when they built the six-hole course in 1889. Henry Hewat, a Scottish engineer, designed a nine-hole course, which opened in 1892. In 1894, a new nine-holes was completed  and garnered further popularity of the club.

Tuxedo hosted the country's first interclub match in the summer of 1894, when a seven-man team from Shinnecock Hills came to compete. This laid the woodwork for a contest of a greater scale later that October, when six teams, two each from Tuxedo and St. Andrew's, and one each from Shinnecock Hills and Brookline. The match resulted in a tie between St. Andrew's and Brookline that couldn't be resolved, due to the New Yorkers responsiblity to return home to host the "amateur championship." Brookline took the trophy with them, which later was donated to the USGA and is now given to the U.S. Senior Open winner.

In 1953, Tuxedo purchased a farm two miles south of the lake and main clubhouse. Robert Trent Jones was enlisted to design a new course, with 18 holes opening in 1957. With its challenging course design, spectacular main clubhouse boasting a scenic view of Tuxedo Lake and perhaps the broadest ranges of facilities of any club in the region - including court tennis, racquets, fishing, and sailing - the Tuxedo Club is not only one of the finest clubs in the area, but the fulfillment of Pierre Lorillard's dream over 125 years in the making.