In The Nick Of Time: Taylor Wins WGA Mid-Am In Playoff 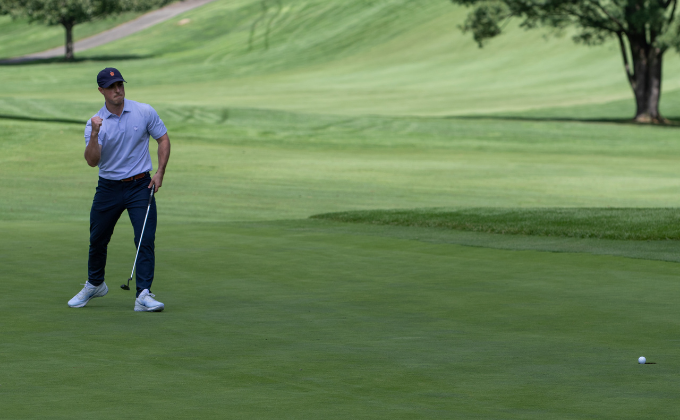 In The Nick Of Time: Taylor Wins WGA Mid-Am In Playoff

STAMFORD, CT (October 7, 2021) – Nick Taylor of MGA eClub-New York City, came from five shots back during the final round of the 12th WGA Mid-Amateur to win the tournament in a playoff. Taylor defeated Chris Flowers of MGA eClub-Connecticut and Sam Weiss of Century Country Club on the 14th hole, the first playoff hole, with a birdie.

“I had a similar putt earlier in the day and knew exactly how it broke,” said Taylor of his putt on the playoff hole. “I wasn’t happy with how I played yesterday, had a great range session after the round and was able to come out here and post a number that gave me a chance.”

Taylor started the day well back of the leader Mark Mumford of Westchester Country Club but stuck with his game plan down the stretch while the leaders struggled. Taylor’s round of 72 tied the lowest round of the tournament and gave him the victory in his WGA Mid-Am.

“Mark is such a good player, so I knew that I had to play really well this round to have any chance,” said Taylor. “I told myself last night to just take it one stroke at a time and I tried to keep that with me the whole round.”

Both Flowers and Weiss had birdie looks on the playoff hole, with Flowers the closest of the three. Weiss made a late charge on the back nine to force his way into the playoff, birdieing three of the last five holes to join the group for extra holes. Weiss had a five-footer on the 18th to move to +4 and the solo lead, but it just slid by.

Patrick Pierson of New York Country Club also came to the last tied for the lead, but a double bogey pushed him out of contention and out of the playoff.

With the course playing tough over the two days, Taylor said the key for him, and the field was missing in the right spots.

“If you missed in the right spots, you had a chance,” said Taylor. “I didn’t do that on the first day but was able to limit my mistakes much better day two and make some putts as well.”

Taylor closed strong, shooting +4 on his first nine holes of the tournament and going just +1 over his last 27 holes. He was even par over his last 28 holes including his birdie on the first and only playoff hole.

The five-stroke comeback was special, but the win carried extra significance for Taylor as well.

“Today would have been my grandfather’s 86th birthday,” said Taylor. “Ever since my grandmother passed a few years ago and he did I’ve been writing their initials on my golf ball. It was nice to know they we’re watching today.”

This marks the second time that Rockrimmon has hosted the WGA Mid-Am and the first since the passing of Robert J. Bluestone. The field was competing for the championship trophy, which is now named in honor of Bluestone, who passed away in July of 2019. Bluestone was a former president of Rockrimmon Country Club and spent much of his time at the Stamford, Conn., Club. He dedicated many years serving as a volunteer on the MGA Executive Committee and MGA Foundation’s Board of Directors and served as president of the Westchester Golf Association and its Caddie Scholarship Fund.