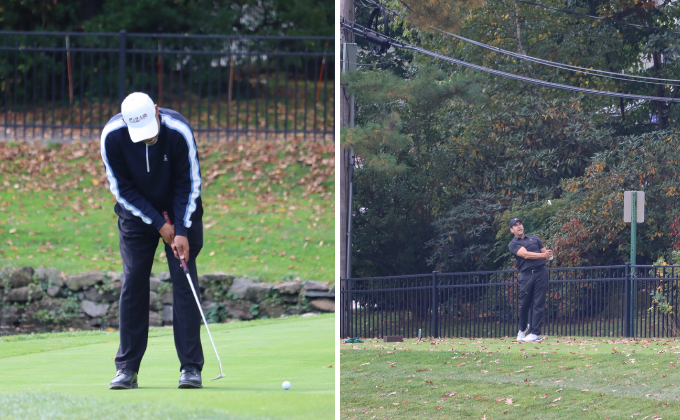 PELHAM, N.Y. (October 17, 2022) –  A duo of past WGA Mid-Am Champions lead the field from Pelham Country Club after the first round of the 13th WGA Mid-Amateur Championship. On a day when no one broke par, 1-over was good enough to set the mark to beat heading into Tuesday.

Three-time WGA Mid-Am champion, Patrick Pierson of New York Country Club, and 2012 WGA Mid-Am champ Michael Karger of Century, both sit at 1-over after the first round. Pierson had four birdies and five bogeys on his round as a string of three bogeys in a row on the back prevented him from getting into red figures. Still, on a tough day, Pierson missed just one green and sits in a strong spot heading into Tuesday’s final round.

Karger featured a slightly less active scorecard than Pierson, though still managed three birdies and four bogeys. He and Pierson will be matched together in tomorrow’s final pairing.

Right behind the group at 1-over, a strong contingent of golfers finished their day at 2-over. Defending WGA Mid-Amateur champion Nick Taylor of the MGA eClub – New York, 2022 Met Amateur champion Brad Tilley of Sleepy Hollow, and Tim Moynihan of Pelham all finished their rounds with 73’s. Tilley bounced back after four bogeys in his first five holes. Taylor lost steam towards the end with three bogeys in his last eight holes, but still has a strong chance to retain his title.

Jeremy Franklin of Sterling Farms and one of last week’s WGA British Victory Cup champions, Patrick Mainey of Powelton, both sit at 3-over, just two strokes off the lead.

The final round will begin at 8 am tomorrow morning, with a total of 41 golfers making the cut. Last year’s WGA Mid-Am was decided in a playoff, with Taylor winning the title on the first playoff hole after trailing by five strokes going into the final round.

The field will be competing for the championship trophy, which is named in honor of Robert J. Bluestone, who passed away in July of 2019. Bluestone was a former president of Rockrimmon Country Club and spent much of his time at the Stamford, Conn., Club. He dedicated many years serving as a volunteer on the MGA Executive Committee and MGA Foundation’s Board of Directors and served as president of the Westchester Golf Association and its Caddie Scholarship Fund.