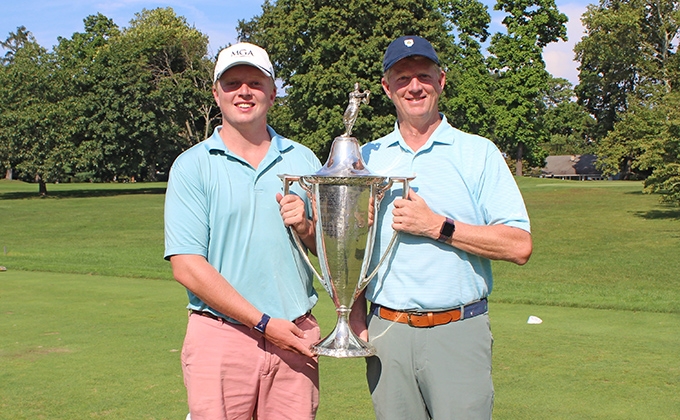 NEWBURG, N.Y. (August 19, 2019) – The father-son team of Tore and Bear Carlson of Bedford Golf and Tennis Club took the title, Monday, in the 94th British Victory Cup at The Powelton Club, firing a phenomenal 9-under 61 in the four-ball format.

Crediting a great short game and rarely missing a putt, the pair finished four shots ahead of the next best score, coming from John Vignola and Robert Johnson of Trump National - Hudson Valley. Bear, who won the title in a playoff last year with brother Nils, gave the tandem a hot start, making eagle on the short par-four second hole. The two combined for just five bogey-or-worse scores on the day, but with the other making par in each occurance. Birdies on Nos. 4, 5, 8 and 9 led the Carlsons to a 6-under 29 on the opening nine.

On the way in, the duo tacked on a trio of birdies en route to the victory.

In the net division, Simon Higgs and John Dearden of Trump National - Hudson Valley took the low prize with an 8-under, 62. Jeffrey Blutstein and Vincent Bitondo of Salem Golf Club took the second low net prize.