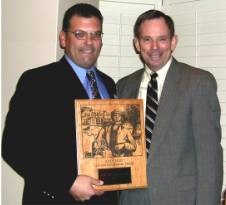 In keeping with the strong tradition of presenting the John Reid Lifetime Achievement Award to a person who exemplifies all that is great about the game of golf, the Metropolitan Golf Course Superintendents Association has chosen Gene Westmoreland to receive its 2005 Reid Award.

In announcing Gene’s selection, MetGCSA President Will Heintz describes him as “a wonderful supporter of the golf course superintendent.”

Will continues, “Gene, who for the uninitiated is the MGA’s assistant executive director and tournament director, has remarkable insight into the superintendent as a professional. But just as important, he is, as the award criteria states, ‘committed to the game of golf and the science of golf course management.’  We are proud to add his name to our list of Reid Award recipients.”

Past Reid Award winner and Met PGA Section Executive Director Charles Robson, was equally pleased to learn of Gene’s honor.  “When I think of Gene, I think of the ultimate professional.  Whether he’s making a ruling, running an event, marking a golf course, chairing a meeting, or addressing a crowd, Gene is always in control and presents an image that not only reflects well on the MGA, but on the game and administration of golf.

“In keeping with the ideals of the John Reid Award,” adds Charlie, “his knowledge of and his commitment to the game have helped to set an incredible standard for everyone in the golf community.  His selection is not only is an honor for him and the MGA, but also the MetGCSA.”

Gene, like many of those who chose the golf business as a career, started out as a caddie.  As soon as he was old enough to carry a bag, he began working—and playing whenever he could—at Harrison Country Club, today’s Willow Ridge in Harrison, NY.

After graduating from Pace University with a degree in accounting and marketing, he accepted a position in 1966 at his alma mater’s Westchester and New York City campuses.  He began as an assistant basketball and baseball coach, then was elevated to associate director of athletics, and finally, head basketball and baseball coach.  A sports enthusiast, Gene spent summers during his tenure there playing competitive golf.  He was a four handicap.

Gene’s transition into the golf world began in 1978.  After answering an ad in The New York Times for an MGA tournament “field team” member, he began working summers—on a per diem basis—with Jay Mottola, who’s now the MGA’s executive director.  He remained at Pace while assisting at MGA championships for the next three years.

Finally, in 1980, he said a fond farewell to the university and accepted a full-time position with the MGA, directing the planning and execution of all MGA-sponsored golf events. “Though my title has never changed, my role, like the game of golf, has evolved and expanded over the years,” says Gene.

When talking with Gene about his job, it’s obvious that he loves what he does and enjoys tending to all the details that make an event a success.  “I feel a tremendous sense of satisfaction at the conclusion of each and every MGA event—from junior tournaments and qualifiers right on through to the majors,” says Gene.  “When an event is a success, I know it—whether anyone says anything or not.  It makes me feel good when all the effort that goes into planning results in a good event.”

Gene’s commitment to promoting the game of golf goes well beyond his work with the MGA.  Says Jay Mottola, another past recipient of the Reid Award, “For more than 20 years, Gene has worked closely with the area’s golf course superintendents, and he knows and values the critically important role they play in the success of our clubs and the game of golf.”

Gene has served on the executive committee of the Tri-State Turf Research Foundation since its inception in 1990, supporting research that helps superintendents combat turf-related challenges and concerns.

Gene has also worked long and hard to put a dose of reality into tournament preparations.  He frequently lectures and writes on the do’s and don’ts of tournament prepwork and is currently teaching a class at Rutgers’ Cook College titled, “How to Prepare Your Course to Host an Event.”

To Gene, an ideal tournament setup does not necessarily mean the greens should be their fastest; more important is that the course set-up matches the expectations of the day.  Explains Gene, “The best setup is one that is in perfect harmony with the size of the field, the weather, and the players’ skill level.”

According to Jay Mottola, Gene has always been a voice of reason on issues like green speed and height of cut.  “Gene is probably the only tournament director,” says Jay, “who has gone into a major MGA championship and told the superintendent that it was okay to raise the height of cut and lower the speed of the greens!

Of course, Gene is quick to remind us of the golden rules of tournament preparation: “The course, naturally, should be in good condition,” says Gene.  “In addition, all hazards should be properly and clearly marked; ‘out of bounds’ must be marked and visible; hole locations should be challenging and logical while requiring a variety of shots and putts; and nothing should ever be done to slow play unnecessarily, such as excessive rough or excessively firm greens.”

The Downside to Escalating Expectations

Knowing full well the escalating demands placed on superintendents today, Gene is the first to sympathize with the challenge of surviving what seems to be an ever-expanding golf season: “The season no longer runs from Memorial Day to Labor Day,” acknowledges Gene.  “It goes from the time the snow melts to the first big snowfall—and sometimes beyond.”

Along with the lengthier season is an extended to-do list for superintendents.  “No longer is the superintendent simply a greenskeeper, but rather a sophisticated manager in charge of the club’s most valuable asset,” says Gene.  “Superintendents must be conversant with today’s employment and environmental laws, control a large budget and staff while staying on top of technical changes, and they must be articulate and able to deal with an upscale membership and board.”

To help superintendents manage their increasingly complex operation while maintaining a professional working relationship with their green committee and membership, Gene helped initiate the MGA’s Green Chairman Education Series.  “The intent of the sessions is to foster a better understanding—and line of communication—between the superintendent and green chairman,” says Gene, who feels that the ongoing series of educational sessions have, in many cases, helped bridge the significant gap in understanding that green chairmen have about the superintendent’s role and high level of responsibility.

One perception Gene hasn’t been able to change, however, is the one relating to the “Augusta Effect.” “People watch televised golf, they see the level of conditioning that can be achieved by today’s talented superintendents, and they have the false expectation that superintendents can—and should—achieve those conditions on a dailybasis,” says Gene.  And then, of course, there’s a price to pay—in more ways than one.

As Gene points out, “Maintaining a high level of course conditioning costs money. These rising costs have forced clubs to expand the number of revenue-producing events, which reduces the time superintendents have to work their magic.  It’s a Catch 22.” adds Gene.

There’s another challenge Gene sees with creating faster greens that has less to do with the superintendent and more to do with the game itself: “Super-fast greens create difficulties with hole locations and, worse, jeopardize the very playability of the older, smaller putting greens,” says Gene, adding, “Couple speed with high rough, and the pace of play will slow to crawl, no matter what the skill level of the golfers.”

Committed Through and Through

In addition to the superintendent, Gene has promoted the growth and development of numerous other contributors to the golf industry: a long line of former assistants and interns.  “I really enjoy working with young people and watching them move on to successful careers in the golf industry.”  There’s Jamie Conklin who’s now a rules official for the PGA Tour; Barry McLoughlin who’s the executive director of the First Tee at Moshulu; Tom Dunnam who’s the MGA director of handicapping, course ratings, and member services; Peter Morrice who’s a senior writer at Golf Digest; Tom Monteverdi who’s an assistant golf professional at Greenwich Country Club; and Peter Speziale who happens to be an aspiring golf course superintendent.

“Despite all Gene’s done to advance the role of the golf course superintendent and others in the golf industry,” says Jay Mottola, “he continues to give back to the game of golf in a number of different ways.”

Listing Gene’s contributions, Jay says: “He was the only non-executive director ever elected president of the International Association of Golf Administrators.  He’s a member of Winged Foot, serving on its Board of Governors.  In 2004, when the U.S. Amateur was held at Winged Foot, Gene served on the Executive Committee, and he’s serving as the co-chair of the Scoring Committee for this year’s U.S. Open.  Gene is also a member of the USGA’s Mid-Am Committee and has served on the Rules Committee at six USGA National Championships.  He currently writes a column on the rules of golf for Met Golfer and the Suburban Golfer and did the same for the Senior Golfer when it was still being published.”

As a final note, Jay says, “I can think of no more deserving person in the golfing community to receive the Reid Award than Gene Westmoreland.”

Gene refers to himself as the weekend commuter.  His wife of 15 years, Mary, is a colonel in the United States Army, stationed for the past 3 1/2 years at the Pentagon in Washington, D.C.  Gene spends most weekends with Mary in our nation’s capitol.

When he’s not en route to or from D.C., Gene enjoys playing a few sports, with golf high on his list.  Though he boasted a 4 handicap in his youth, he now plays to a 14—usually at Winged Foot, where as a member, he feels “blessed” to be able to continue to play the game he loves on such a historic track.

Always on the move, Gene plays racquetball and, until last year, basketball.  He enjoys birding as well, which for him means merely being outdoors with his eyes and ears open.

Being a golf and wildlife enthusiast, it only follows that he’s a strong proponent of the Audubon Cooperative Sanctuary Program for golf courses.  He firmly believes that golf course superintendents should remind their membership and their community that golf courses are one of the best animal and plant sanctuaries in the community.

“Superintendents should get the word out that their golf courses are some of the best nature preserves in the Met area and are home to a surprisingly diverse number of wildlife and plant species,” says Gene.  “By achieving community recognition, the superintendent can help to alleviate much of the misinformation about golf courses and their impact on the environment.”

When asked how he felt about being chosen for the Met’s coveted award, Gene responded, “I am honored to receive the John Reid Lifetime Achievement Award and to be recognized by a group of individuals and an organization that has added so much to the game of golf.”

Gene is the 17th recipient of Reid Award, which was initiated in 1986 and named after the man affectionately known as the “Father of American Golf.”

John Reid was not only the first to play golf in this country (in 1888), he was also instrumental in forming the first golf club at St. Andrews and, later, the USGA and the MGA.  Probably even more important to superintendents is that John Reid, by recognizing that golf courses required daily maintenance and care, was, in large part, responsible for establishing the golf course management profession.

Glenn Perry, co-editor of the Tee to Green, is superintendent at Rolling Hills Country Club in Wilton, Conn.