ELMSFORD, N.Y. (July 10, 2008) – Former MGA/MetLife Boys champion and 2008 U.S. Junior qualifier Cameron Wilson of Norwalk, Conn., and 2007 Met Junior runner-up Max Bichsel of Cranbury, N.J., lead a field of 64 outstanding Met Area junior players when the 91st Met Junior Championship, sponsored by MetLife, comes to Rockaway River Country Club in Denville, N.J., July 15 through 17. Wilson, who was the medalist in a 2008 U.S. Junior qualifier earlier this month, seeks to become the tenth player to win both the MGA/MetLife Boys and the Met Junior Championships. To do so, he’ll have to contend with a deep field of players, including the 2007 MGA/MetLife Boys runner-up Michael Miller of Brewster, N.Y., who also will be in the field for the U.S. Junior, to be held the week after the Met Junior.

Sponsored by MetLife for the 24th consecutive year, the Met Junior consists of three consecutive days of match play. It is a test of mental as well as physical endurance, as the eventual champion will have survived two 18-hole matches each day. The field is whittled down from 64 to 16 after the first day, and there are traditionally some surprising results. Before taking the course for the first round matches, the players will have the opportunity to test the 6,561-yard, Tom Gourlay and Devereux Emmet layout on Monday, July 14, when the MGA/MetLife Pro-Junior is held for the 41st tim 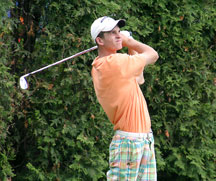 e. Each Met Junior entrant will team up with a PGA professional in a better-ball competition.

While many eyes will be on Wilson, Bichsel and Miller, there are a host of other challengers who are poised to win a Met Junior. Anthony Aloi of Plainsboro, N.J., and John Inman of Skillman, N.J., joined Wilson and Bichsel at the U.S. Junior Amateur in 2007 and will look to add their names to the coveted Mandeville Trophy. New Jersey State Boys champion Dillon Corbo of Montville, N.J., and Long Island Junior champion Ryan Homola of Amityville, N.Y., are also in the field and promise to mount a strong challenge. Bobby Krueger of Denville, N.J., will represent the host club in the championship.

The Met Junior Championship, sponsored by MetLife, is open to all male golfers, not yet 18, who are accredited students at schools in the MGA district. Complete coverage of the Met Junior Championship will be available at www.mgagolf.org, where you can also find frequent scoring updates for each match and live scoring for the semifinals and finals provided by the USGA’s TPP Real-Time scoring system.

For more information on the Met Junior Championship please contact Greg Midland at 914-347-4653 or via e-mail at gmidland@mgagolf.org.