SCARBOROUGH, N.Y. (August 25, 2011)– The final day of the 96th Met Open Championship sponsored by MetLife was a story of conquering 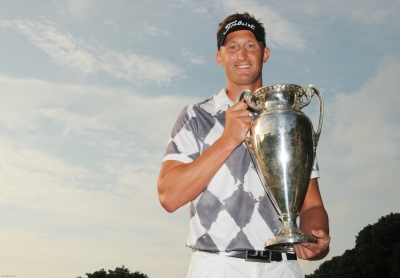 adversity. Mother Nature threw a curveball, bringing lightning and occasionally heavy rains that resulted in a nearly three-hour suspension of play. But the best story of all belongs to newly crowned champion Tyler Hall, whose tale includes overcoming adversity in the form of injuries, surgeries, and a shadow of doubt that he would even compete this week.

Hall shot a final-round 67 to finish at 4-under-par 206 and take home the $27,500 first-place check from the $150,000 purse, a crowning achievement in the Met Area’s most important championship. At the end of the 54-hole championship at the spectacular Sleepy Hollow Country Club in Scarborough, N.Y., the 30-year-old Hall, who won the 1997 MGA/MetLife Boys Championship, has a renewed interest in continuing his career as a professional.

“I came in here with a pretty heavy heart, being in my seventh year as a professional,” Hall said. “Entering this week, I was thinking this was going to be my last event as a pro. To be honest, the day before [the championship] I was ready to withdraw. I didn’t think my game was ready and my attitude wasn’t there.”

Hall’s struggles stem partly from his recovery from a torn labrum that he had surgery on this past November. “It’s been a tough road and I’m getting married in April, so I’ve been thinking about what’s next. I have been telling everyone around me that I needed to win this tournament, and to be standing here as the champion is incredible.”

Hall’s final round got off to a quick start as he birdied the first hole and, after rattling off four consecutive pars, eagled the par-five sixth hole. He then struck a tee shot on the par-three seventh that he thought was “dead,” but the ball got a favorable bounce and came to rest four and a half feet from the hole. With that makeable birdie putt ahead of him, the horn blew at 10:55 a.m., signaling the suspension of play.

“Sitting down during the delay, all I could think about was that upcoming putt.” As play resumed at 1:45 p.m., Hall picked up right where he left off by sinking the birdie. A bogey on eight brought him to the par-four ninth, where he saved himself from dropping out of contention. An errant tee shot into the woods forced him to punch out, only advancing the ball ten yards into thick rough. At a 45-degree angle from the green, Hall hit what could be considered his best shot of the championship—up to that point—with the ball coming to rest ten feet from the hole. He sank the putt to save par. 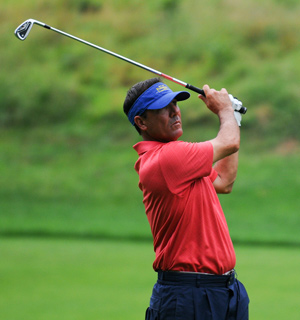 Coming down the stretch, Hall started to falter as the pressure grew. He had a three-putt bogey on the picturesque par-three 16th hole, which led to a snap-hooked tee shot on 17, where “my ball found the second fairway, which I thought would have been impossible,” Hall laughed. Standing on the 18th tee, Hall hit a good drive down the right side of the fairway. After missing the green to the right, Hall hit a tremendous flop shot from the side of the hill and over a bunker, thinking to himself, “this is a shot I have hit a million times.” His ball came to rest 15 feet from the hole, and with a large gallery of friends, family and players watching, Hall sank the par putt to safely hold the clubhouse lead and eventual winning score of 4-under.

Hall wasn’t the only player moving up the leaderboard on a day that saw plenty of drama over the legendary fairways of Sleepy Hollow. A number of contenders got off to hot starts, including Bobby Gage of Forsgate, who finished alone in second place at three-under-par 207. Gage propelled himself from six strokes back at the start of the day to within shouting distance of the lead by going 5-under through the first six holes, including an eagle on the par-five sixth.

“All in all, I had a good week,” said Gage. “I was fighting my putter the first two days, and then today I just was able to roll them in. This course is a gem, and you have to give these greens so much respect.” The finish is the career best for Gage, 46, who played for several years on the PGA and Nationwide tours.

Tying for third at two-under 208 were 2005 Met Open champion John Stoltz of Concord, who shot a 5-under 65 today; 2010 Met Open runner-up Dan Balin of Burning Tree, who had a final-round 68; and Joe Horowitz of Lido, who followed up his second-round 63 with a 71 today.

Overnight leader Morgan Hoffmann of Arcola didn’t have the day he envisioned. Following a nice birdie at the first hole, he then made two consecutive bogeys to fall out of the lead for the first time since the beginning of the second round. The 22-year-old, who just turned professional in June and has played mainly on the PGA and Nationwide Tours this summer, struggled to a three-over 73 and finished in a tie for sixth at one-under 209.

Also finishing at 209 were Del Ponchock of Hudson National, David Schuster of Haverstraw, and 1987 Met Open champion Jim McGovern of White Beeches, who had an impressive round of 67 that included six birdies.

“I gave myself a lot of chances today, and it was a really good week,” said McGovern, who won the 1993 Shell Houston Open on the PGA Tour and also won three times on the former Ben Hogan (Nationwide) Tour. “I think this golf course is phenomenal. You better be a good player if you’re a member here.”

Other notable finshers include Rob Labritz of GlenArbor, who tied for 12th at 211, along with Frank Esposito of Brooklake. Trying to become the fifth player to win the Met Open and New Jersey Open in the same season, 2008 Ike champion Kevin Foley of Neshanic Valley came undone with a second-round 79, but finished strong today to tie for 16th with a 4-under 66. Former Met Open champion Mike Gilmore of Winged Foot finished tied for 18th at 214.

In addition to the outstanding field and high caliber of play, the unquestioned star of the 96th Met Open was the golf course. Sleepy Hollow showed that it is both an enjoyable members’ course and a true test of championship golf, with views and green complexes that are equally beguiling. Since this was the first time the club has hosted the Met Open, many players had not seen the course before this week, and all came away impressed. Over the course of the championship, the scoring average was 74.4 with 12 eagles and 724 birdies.

The top 25 finishers plus ties in this year’s Met Open earn an exemption into the 97th Met Open Championship, to be played at Plainfield Country Club in Edison, N.J.