DENVILLE, N.J. (July 17, 2014) –  Dawson Jones will have his name added to the Mandeville Trophy after the Howell, N.J., resident  won the 97th Met Junior Championship Sponsored by MetLife over John VanDerLaan of Southbury, Conn.

Jones put himself in the lead early on in the final 18-hole match, finishing the first 9 holes with a 3 up advantage over VanDerLaan. After the turn, VanDerLaan began to make a comeback on the 12th hole, when VanDerLaan made a birdie to get to just 1 down. “What I thought was going to change the momentum for me was when I drove 12 and was able to make birdie, he made par and I was 1 down at the point,” VanDerLaan said.

VanDerLaan kept that momentum going with a par on 13 while Jones made a bogey to get the match to all square. 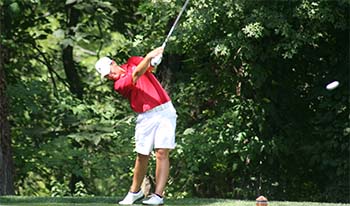 The two truly battled it out for the final few holes, and on 16 Jones failed to get up from a bunker while VanDerLaan made birdie, but Jones made a birdie himself on 17 to get back into the lead. VanDerLaan and Jones both made par on the final hole, leaving Jones with the 1 up lead to claim the Met Junior title.

Jones, 16, gave credit to his putting throughout the week which helped propel him to victory. “Today I came out and I was knocking 10 footers, 6 footers…inside 10 feet, my putting was on point.” Jones is coming off of a breakthrough season during his junior year at Howell, where he won the first three events on the 2014 season and went on to win the Shore Conference title.

This victory along with his other stellar play throughout 2014 has earned Jones an invite to the 51st Williamson Cup being played at Laval sur le Lac Club in Montreal, Quebec, Canada.

This morning, Jones defeated Matt Lowe of Farmingdale, N.Y., in their semifinal match. Lowe is headed to Richmond this fall and was a co-medalist in the event’s stroke-play qualifying, but he couldn’t get a lead going on the back nine in today’s semifinal match, making it to the 15th hole but falling to Jones 4 & 3.

VanDerLaan got off to a hot start in his semifinal match against Thomas LaMorte of Haworth, N.J, as he was 4 up after the first four holes. The Campbell University bound LaMorte rallied on the back nine however, and pushed the match to 18 holes. Going into the final hole, VanDerLaan was 1 up, and after both players made pars, it was VanDerLaan who advanced to the final match.

VanDerLaan, 18, the 2012 CSGA Junior Amateur champion, is headed to Florida Southern College in the fall. He won the 2014 U.S. Challenge Cup Junior Match Play at Wannamoissett Country Club in Rhode Island in April.

The Met Junior saw a change in the format this year: players still qualified on the sectional level, but there was an on-site stroke play component added to the championship. The juniors played 36 holes in the on-site stroke play qualifying on Tuesday, with the low 16 scorers advancing to match play for the remainder of the event.

The Met Junior Championship Sponsored by MetLife is recognized as the nation’s oldest junior championship. The event was founded in 1912 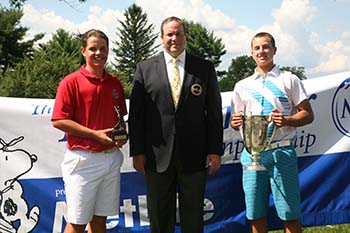 and since its inception has produced a number of winners who have gone onto outstanding achievements on both the regional and national levels. Butch and Bill Harmon, Marc Turnesa, Andrew Svoboda, Mike Miller and Cameron Young are just some of the names on the trophy.

This was the 12th year that Rockaway River Country Club hosted the Met Junior. The 6,712 yard layout was a great test for the field of juniors.  The course and specifically the greens were in amazing shape especially considering the massive storms that passed through earlier in the week.

The championship is open to juniors who have not started attending college, are not yet 19 by July 30 and who reside in the MGA territory. Players who advanced to match play will now receive an invitation to the Carter Cup at Baltusrol Golf Club on July 30, 2014.