GARDEN CITY, N.Y. (August 29, 2012)– Peter Busch of Galloping Hill overcame a three-shot deficit in the final round and defeated fellow New Jerseyan Ed Whitman of Knickerbocker on the first hole of a sudden-death playoff to claim the 16th MGA Senior Open Championship at Garden City Country Club. It was the first time the MGA Senior Open was decided in a playoff since 2000, when Jim Miller took the title at Fenway Golf Club.

Busch, who parlayed his sharp first-round 68 with a 72 to finish regulation play with an even-par 140 total in today’s more difficult conditions, became the oldest winner of the championship at 59 years, two weeks. He takes home a $5,000 winner's share of a $30,000 purse. 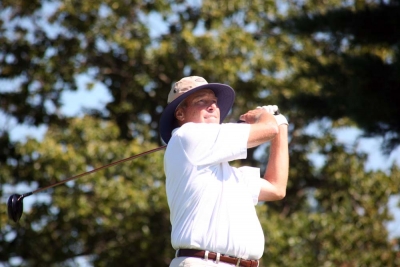 Whitman began the day with a three-stroke lead over a quartet of fellow competitors, but it didn’t take long for Busch and Whitman to separate themselves from the pack. The two were paired together in the final group and matched scores from the 14th hole on, including bogeys on the par-three 17th hole that brought them to just one stroke ahead of clubhouse leader Tom Sutter of Dunwoodie.

After matching pars on the par-4 18th, Busch and Whitman proceeded to sudden death on the par-4 first hole. Whitman came up short with his approach and flew his bunker shot over the green, opening the door for Busch to win with a par.

“We really had fun today,” Busch said. “Ed and I have done battle before, and most of the time he comes out on top. But it’s always great playing with everyone from the Met Area. If you could win something like this, it’s fantastic.”

Whitman, the 2004 Senior Open champion who shot a competitive course record 5-under 65 in the first round, couldn’t really get anything going throughout the day, recording five bogeys and no birdies.

As much as Busch was the story for his grind-it-out style, the weather throughout the championship nearly snatched the headlines. Heavy storms postponed play on Monday, and officials weren’t able to resume the Senior Open until Tuesday at 12:30 p.m.  During the final round on Wednesday, a strong north wind protected the course from a single under-par round. 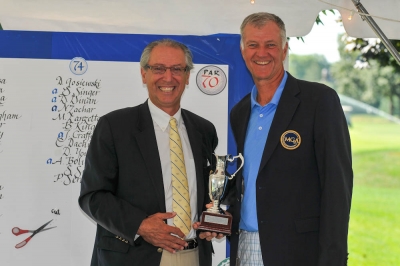 Sutter, who finished alone in third with a total of 1-over 141, had the low round of the day, an even-par 70. Sutter mentioned that before the final round he thought he needed to shoot something in the 60s, and almost did when his birdie attempt on the 18th green came up just short.

“I played nicely today,” Sutter said. “You know, it’s always a little easier when you’re behind, so I was relaxed coming in and I’ve been playing pretty solid. The course played tough, the wind was blowing in an opposite direction, so that was a change.”

Taking low amateur honors was 2009 MGA Senior Amateur champion Allan Small of Fairmount. Small, who finished with a 2-over 142 total, tied for fourth along with Kevin Syring of Alpine.

The low five amateurs (Small, Graham, Vannelli, Ed Gibstein of Engineers, and Michael Birmingham of Nassau Players) all receive invitations to the 2012 MGA Mid-Amateur Championship, to be played on October 2 and 3 at Meadow Brook Club in Jericho N.Y.

The MGA Senior Open will visit Sunningdale Country Club in Scarsdale, N.Y., next year on August 26 and 27. And for the first time, the MGA will conduct a sectional qualifier where players who are not otherwise exempt into the championship will be required to play their way into the field.