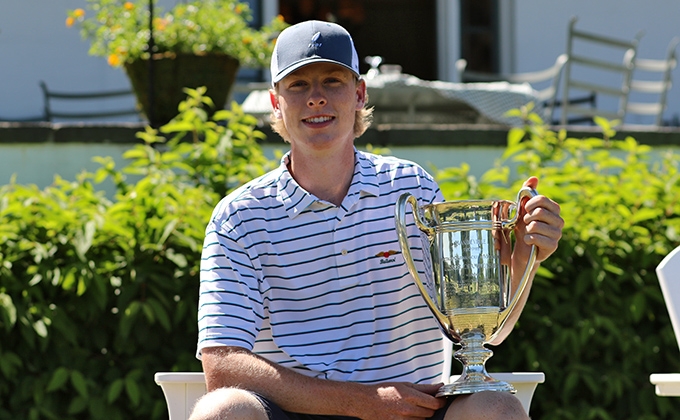 BRONXVILLE, N.Y. (July 19, 2018) – Jack Boatwright of Fairfield, Conn., put the exclamation point on a stellar week at Siwanoy Country Club on Thursday, earning a 2-and-1 win over Will Celiberti of Ridgewood, N.J., to claim the 101st Met Junior Championship Sponsored by MetLife. With the victory, Boatwright earned 250 points in the race for the MGA Junior Player of the Year Award, Presented by Callaway.

Boatwright cruised to a 5-and-4 victory in the morning semifinal over James Pak of Palisades Park, N.J., then carried momentum into the championship match, winning five of the first nine holes to build a 3-up lead, continuing to lean on strong ball-striking that served as his strength through the week.

“My ball-striking has been great,” said Boatwright, the grandson of past USGA Executive Director P.J. Boatwright, Jr. “I stuck a lot of greens. I hit a lot of fairways. I really found the center of the clubface a lot and it was so much fun hitting the ball like that.”

The 18-year old benefitted from quick starts in three of his four matches during his championship run, and overall won 16 holes on the outward nine to just eight for his opponents.

Pars proved good enough for Boatwright on Nos. 2 and 3, while Celiberti--who defeated Brendan Hansen of Spring Lake, N.J., 2-and-1 in his semifinal--chimed back with a birdie on the par-five 4th for his first win of the match. Boatwright then stuck his tee shot on the par-three 6th and his three-footer was conceded for birdie as Celiberti made bogey.

The pair traded wins over the next four holes, with the highlight coming on the par-four 9th, where the tees were set forward and measured just under 300 yards. Boatwright smashed a pin-seeking drive, the ball coming to rest just six feet from the hole. While Celiberti got up-and-down for birdie from the greenside bunker, Boatwright confidently sank the eagle putt to go 3-up.

Even while seemingly in control, Boatwright wouldn’t let his mind wander too far. “I just wasn’t trying to get ahead of myself,” he said. “I had thoughts of myself holding this trophy and I quickly got them out of my head because I’ve done that before and it never ends well.”

Celiberti trimmed the deficit to two behind a par on the 10th, but Boatwright hit another close approach on the par-four 12th and made birdie to return his advantage to three.

The pair halved the next three holes, including the pivotal 15th, where Boatwright played his second shot off the tennis courts right of the fairway, then holed a 10-foot putt to save bogey and match Celiberti, who could not get up and down from the greenside bunker. For Boatwright, the salvaged bogey gave him confidence that he’d close out the match.

“I always believed that Will at any moment could make a few birdies and give me a run,” said Boatwright, who said a tune-up with his instructor Jim Fatsi of Brooklawn served as his preparation for the championshio. “After I made the bogey putt on 15 to get the match to dormie, I felt that I was in control and if I just hit some fairways and greens it would pay off.”

While Celiberti claimed the 16th with a par-four, matching par fours on No. 17 closed out the match for Boatwright.

“I can’t even tell you what it means,” said Boatwright of the victory in the nation’s oldest junior championship. “It’s my first win in a long time and I think my first win ever on the junior circuit. To have it be a tournament as big as this, I can’t imagine a better way.”

Boatwright's 250 points in the race for the MGA Junior Player of the Year Award, Presented by Callaway shoots him to the top of the listing. The award, established in conjunction with the 100th Met Junior in 2017, recognizes excellence among junior competitors in the Met Area. Connor Belcastro of Rowayton, Conn., stands second after advancing to match play in the Met Junior, while Jack Wall of Brielle, N.J., sits third thanks to a runner-up finish in the New Jersey Amateur. The next big points event for juniors is the 16th MGA Carter Cup, August 1 at Winged Foot Golf Club.

Historic Siwanoy Country Club—site of the first-ever PGA Championship—proved to be a stern test during qualifying and an outstanding match play layout for the Met Junior. Only three players broke par in stroke-play qualifying, while match play saw plenty of both birdies and bogeys. Rolling terrain, angled fairway bunkers, and undulating greens highlight the Donald Ross gem.