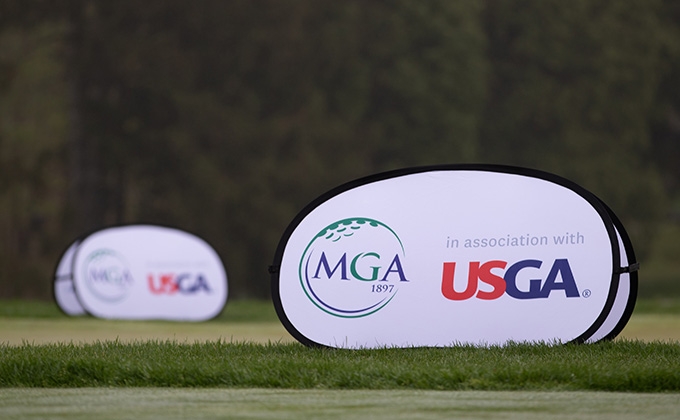 Hours after medalist Jason Caron of Greenlawn, N.Y., carded a smoldering 6-under 64, eight players grabbed their clubs out of their trunks and trekked back to the first tee for an eight-for-one playoff.

Despite waiting hours to contest for the final advancing position, it only took a matter of minutes for amateur Bill Whalen Jr. of New York, N.Y., to flip a wedge to seven feet and sink the left to right breaking putt that locked his place in sectional qualifying.

“I felt like I fought hard all day, I was off in the afternoon so the wind was blowing a little bit,” said Whalen. “I played pretty well, made four birdies, gave a couple back, and really did think it would be under-par to get through so to be in the playoff it was a bonus.”

Past Met Open Josh Rackley set the early clubhouse lead with a 3-under 67, but most of the day's chatter went to Caron's amazing front nine and steady back.

“The golf course is in mint shape and we had little wind until the last two or three holes,” said Caron, who will play in next week's PGA Championship at Bethpage Black. “I just wanted to keep playing we'll, and beating the golf course is my whole goal and if it becomes six-under, its six-under.”

Following Caron and Rackley was Matthew Sita of Glen Cove, N.Y., who finished with a 3-under 67.

Another Met Open champion and Rockville, Md., native Danny Balin, led a trio of qualifiers with 2-under 68s. Balin, the runner-up at the recent PGA Professional Championship who will get his sixth PGA Championship start next week, kept the goal in reach on his front nine after going out in even-par 35, but carded 33 over his final nine holes to continue hopes of competing in another major championship this summer.

“I know Old Oaks and Century very well,” said Balin, who is in his first season at Fresh Meadow Country Club. “So it would be nice to go back into sectionals and play those golf courses that I’ve played for the last 15 years. So I know them kinda like the back of my hand.”

Dylan Newman of Greenwich, Conn., and Sean Quinlivan of Huntington, N.Y., rounded out the qualifiers, also carding 2-under 68s.

The round was the third of four local qualifying rounds for the 119th U.S. Open Championship conducted by the MGA, with the last coming on Thursday, May 9 at Hollow Brook Country Club in Cortlandt Manor, N.Y.