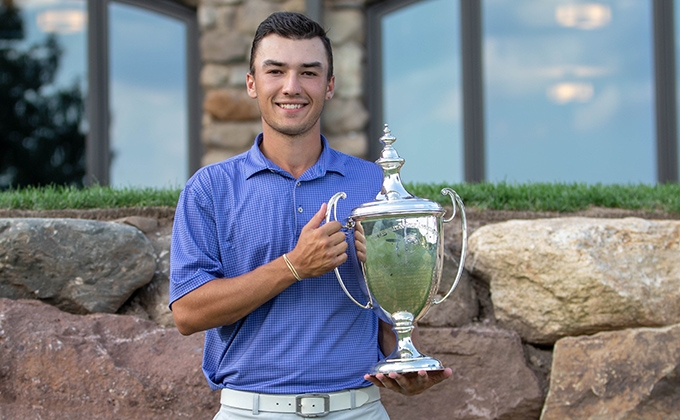 PARAMUS, N.J. (August 5, 2018) – Ryan Davis of New Jersey National closed out a week of impressive golf in the 116th Met Amateur Championship, Sunday at Arcola Country Club, posting a 2-and-1 victory over Christian Cavaliere of Mahopac to claim the MGA’s oldest title in his first-ever appearance in the event. The win served as the exclamation point to Davis' week, having never trailed at any point during his four matches.

Davis, 20 and a rising junior at Penn State, steadily built his lead in the 36-hole championship match, registering four birdies in the first nine holes to take a 3-up lead. The birdie barrage continued on Nos. 10 and 12, as he pushed the lead to 5-up.

“There’s so much golf out here, you have to stay level and you can’t get to high or too low,” said Davis of earning the five-hole lead in the morning.

Cavaliere, the two-time reigning Westchester Amateur champion, made a quick response shortly after, though, as a par-birdie-birdie sequence on Nos. 14-16 earned him three consecutive wins and trimmed Davis’ advantage to two.

But, Davis closed the morning 18 emphatically, knocking his approach within five feet and calmly draining the putt to carry a 3-hole lead into the afternoon.

“My putting all week has been great, especially this morning, I made so many putts and that’s how I got off to such a fast start,” said Davis.

Cavaliere struck first after lunch, making birdie on the par-3 2nd. The two then matched one another shot-for-shot over the next seven holes—all of which were halved with pars—keeping Davis’ advantage at two.

Cavaliere ended the halve-streak on the par-4 10th, draining nearly a 60-foot putt to pull within one for the first time in 22 holes. While Davis made a par-3 to win the 11th, Cavaliere stuck his approach from the left rough of the par-4 13th within eight feet and once again stood just one down after converting the putt.

The two halved the par-3 14th, then traded holes again on Nos. 15-16, as Davis skipped a wedge in tight on 15 for birdie, but bogeyed the next to keep Cavaliere’s hope’s alive.

But, the thought of winning began to set in for Davis as another purely struck iron came to rest within 10 feet on the match’s 35th hole, while Cavaliere’s approach from the left fairway bunker sailed right of the green.

“Coming down 17 I started to feel it a little,” said Davis. “I saw how close my putt was, so I thought I had a really good chance.”

While Davis eased his birdie putt down to the hole, Cavaliere couldn’t get up and down for par, earning Davis the hole and sealing his 2-and-1 victory.

“It absolutely means the world to me right now,” said Davis. “It’s my last tournament until I go back to school, so it’s nice to end on a good note. This is such a prestigious championship, so to get my name on here is something pretty special.”

Davis provided a steady display of golf through the week, to which he attributes a newfound consciousness of course management. “It’s something I’ve changed a lot and I’ve really realized the importance of it in golf,” said Davis of thinking his way around the course. “It’s allowed me to stay consistent and keep everything pretty level.”

With the victory, Davis earns 275 points in the yearlong race for the MGA Jerry Courville Sr. Player of the Year Award. The win also earns Davis an exemption in to next year’s Met Amateur and Ike MGA Stroke Play Championship Presented by Callaway.

Despite a challenging weather week and multiple suspensions of play, the Arcola grounds crew led by golf course superintendent Paul Dotti provided superb playing conditions and allowed the championship to finish on schedule. Championship Sunday began with the conclusion of both semifinal matches, as Davis birdied the par-4 18th to defeat former Met Junior champion Jake Mayer of Plainfield, 2-up, and Cavaliere dropped a 60-foot birdie putt on the 18th to defeat reigning MGA Player of the Year, James Nicholas of Westchester.

“There were a ton of late nights and early mornings, but you just kind of have to keep your head down and keep your nose to the grindstone,” said Davis of managing the schedule. “It’s a long week and you know that coming in, so I just expected it.”

Arcola served as an incredible host for the 116th Met Amateur and was an outstanding match play venue for the championship. The parkland course, which has seen a number of changes in recent years including added length and new bunkering, demands accuracy off the tee and a deft touch around its immaculate greens.