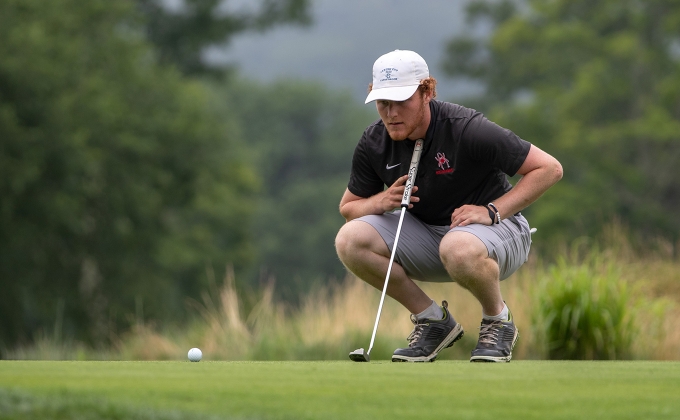 ELMSFORD, N.Y. (November 1, 2021) – The Metropolitan Golf Association is pleased to announce Cole Ekert of Chatham, N.J., as the recipient of the 2021 MGA Junior Player of the Year Award, Presented by Callaway. Ekert had quality finishes in junior championships throughout the 2021 season en route to earning the honor. The MGA will recognize Ekert and his achievement during its 124th Annual Meeting & Dinner on Wednesday, December 1 at Westchester Country Club in Harrison, N.Y.

“To win an award like this, especially in my last chance to win it, it’s certainly something I’ll remember for the rest of my life,” says Ekert, who’s in his first year at Richmond University. “It’s incredible. I’m happy to be joining a good list of players.”

Ekert’s summer schedule began with medalist honors in a U.S. Junior Amateur qualifier at Hawk Pointe Golf Club in Washington, N.J., where he shot a 7-under 65. After making the cut in both the Ike MGA Stroke Play Championship and New Jersey Amateur, Ekert’s schedule shifted to junior events.

While Ekert captured medalist honors in the Met Junior Championship Sponsored by MetLife, any run at The Tuxedo Club in Tuxedo Park, N.Y., came to a sudden halt in the first round.

“Cameron [Besaw] played some of the best golf I’ve seen in any junior golf event. I think he had six or seven birdies on the back nine,” recalls Ekert. “But it was a dogfight. Considering it was my last Met Junior and I lost, I still had a ton of fun.”

Ekert picked up 100 points for his performance and moved on to the U.S. Junior.

“Going down to North Carolina, I really had no expectations because it was my first U.S. Junior,” said Ekert. “I was trying to take in the whole experience. Once the week got started and my game felt good, I was like, ‘Let’s make a run, let’s do it.’”

Rounds of 74-73 at The Country Club of North Carolina placed Ekert in a 13-for-10 playoff, from which he secured a spot in the bracket. Though he fell short in his Round of 64 match, advancing earned him a crucial 50 extra points in the year-long points race.

Ekert then tied for sixth when the Carter Cup returned to its typical host Baltusrol Golf Club in Springfield, N.J., as players competed over both the Upper Course and Lower Course.

Ekert’s junior career came to a finish in New Jersey’s W.Y. Dear Junior Championship. Even though he finished as runner-up to Dean Greyserman of Short Hills, N.J., Ekert considered it a good end to his junior story since Dean is a friend he has enjoyed competing against.  And the run to the final did enough to earn Ekert the MGA Junior Player of the Year Award, Presented by Callaway, by a 45-point margin over Greyserman (410 to 365).

Charlie Berridge (348 pts)  of Scarsdale, N.Y., finished third in the year-long race thanks to semifinal appearances in both the Westchester Amateur and Met Junior championships, while Reed Greyserman (320 pts) of Short Hills, N.J., and Carter Cup winner Nathan Drogin (295 pts) of Essex Fells, N.J. rounded out the top-five finishers.