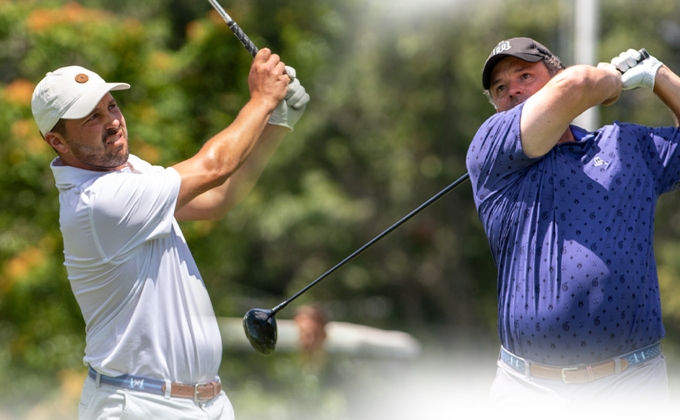 EDISON, N.J. (July 31, 2021) -- After 90 holes of golf, just two players remain. Garett Engel of Old Westbury and Trevor Randolph of Arcola advanced to the final of the 119th Met Amateur at Plainfield Country Club. Sunday’s 36-hole final, which will begin at 7:30 a.m., will pit the 2013 Met Amateur runner-up, Randolph, against a first-time finalist in Engel.

Engel, 37, won his match 3 and 2 over Johnny Bush of Plainfield, while Randolph took care of business with a 1-up win over Ethan Ng of Knickerbocker on the 20th hole.

Engel battled with Bush for most of the front nine. The two flip-flopped back and forth and at the turn the match was tied. Much of the same occurred on the back, until Engel birdied Nos. 14, 15 and 16 to take the match.

“It was really nice to finish like that,” said Engel, the 2017 Long Island Amateur champion. “You know today was a bit of a grind for me and Johnny so it was good to figure a few things out and finish like that.”

Engel, who has yet to see the 17th hole in match play, said he’s just excited to be in the final tomorrow.

“I’ve never been in one of these before and made it this far,” said Engel. “I’m just going to try and stay patient tomorrow and have fun.”

The first-time finalist will square off against Randolph, 48, who has final-round experience. On the 20th hole, Randolph finally closed out another tight semifinal match with a birdie.

“I had a similar putt on two earlier in the day so I knew the break,” said Randolph. “That was either going in or going 20-feet past so I just trusted the line.”

Randolph, who said yesterday that he was playing with house money, expressed that hasn’t changed now that he’s in the finals.

“I know how hard one of these is to get to,” said Randolph. “I was just trying to keep my same mentality as yesterday. I thought even the holes I lost I played well so I’m happy to be in this position.”

Sunday's final is scheduled to begin at 7:30 am. The match is slated for 36 holes. Live scoring will be available on MGA.org or on the MyMGA app. You can follow live updates on twitter @MGA1897.