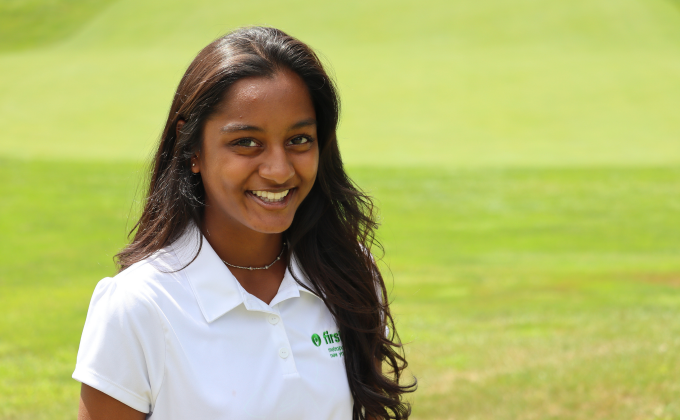 BRONX, N.Y. (Jan 21, 2022) – Like many instructors at the First Tee Mosholu site, Karina Mangru was introduced to golf as a participant in the First Tee’s after school programming. Mangru started early, picking up a club shortly after she could walk and jumping into the First Tee programs at just five years old.

Mangru admitted that it was her parent’s idea to introduce her to golf. Though neither of them had played the sport, they decided that based on the values golf offered, as well as the physical activity, it would be a worthwhile endeavor for their children.

“They decided to start me and my brother in golf when we were pretty young,” said Mangru. “It was their idea at first, but pretty quickly I knew that it was something I wanted to continue with.”

Mangru’s older brother of about a year, Kishan, is also an instructor at Mosholu and started the sport at the same time Karina did.

Karina mentioned that she was never a big sports fan growing up, and largely isn’t to this day. However, golf was compelling to her because of the heavy focus on the mental portion of the game, which is the main reason she believes she gravitated to it so quickly.

“It’s a really nice sport because there are so many other components to it besides just the physical aspect,” said Mangru. “As someone who was never drawn to sports like basketball or football, that part led me to liking golf a lot,” she added.

While the pensive aspect of golf piqued Karina’s interest, the reason golf has remained one of her favorite hobbies for 11 years boils down to one key aspect: the people.

As Mangru can attest to, having spent over a decade learning and coaching at the Mosholu First Tee site, the people she has met through the program have made her experience what it is. Growing up learning the sport after school, Mangru pointed out how much she loved the attention given to not just her golf game, but also to the core values that surround the game as well. While she continues to grow and hone her game, through her instructional experiences she was also able to grow considerably as a person.

Because of Mangru’s positive experiences, she decided she wanted to give back and become an instructor at the Mosholu site.

“I just started as a volunteer because I wanted to be able to teach kids the way that I was taught growing up,” said Mangru. “Then I learned that I could work here as well, and I jumped on that immediately.”

Mangru became a GOLFWORKS intern three seasons ago at the First Tee Mosholu site, bringing knowledge of the game she learned through the First Tee to the latest generation of golfers.

“Being able to work and be a participant at the First Tee is an amazing thing because I can bring things I’ve learned in both areas and help create ideas that can make the experience as good as it can be.”

As Mangru enters her junior year of high school, her attention has started to shift to college and a new journey. Not only does she continue her work for the First Tee as a GOLFWORKS intern, but she also participates in tennis, swimming, and fencing. In addition, she is a member of the yearbook staff at her high school. Mangru said that while she doesn’t know where she wants to go to college, she does have her heart set on studying Pre-Med in New York City.

Before that, however, Mangru still has one more year of instruction left at Mosholu, something she says will be bittersweet when the ground thaws next spring.

“I’ve made some of my best memories at Mosholu,” said Mangru. “It’s nice knowing I have another full year to look forward to, but on the other hand it will be tough to leave when it’s time.”

Karina insisted she is going to make the most of her final year as an instructor and left with one parting thought.

“It’s sad that I have to end this part of my golf career, but it certainly won’t be the end in general.”