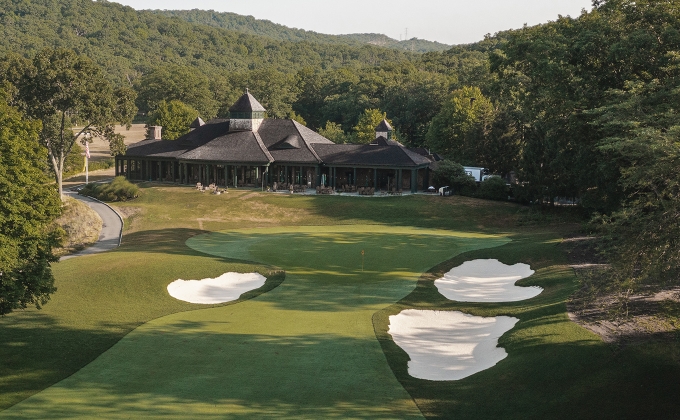 TUXEDO PARK, N.Y. (October 11, 2022) -- Pat Wilson of Hamilton Farm carded Tuesday's lone sub-par score at The Tuxedo Club and takes a three-shot lead into Wednesday's final 18 holes of the 16th MGA Mid-Amateur Championship. Wilson, playing in his first MGA Mid-Amateur, opened his round with a bogey but had a clean card the rest of the way while also rolling in four birdies.

“The pins were really tough,” said Wilson, the 2013 Met Amateur champion who’s making his first start in the Mid-Am. “The greens were firm as can be and super fast. Thankfully the conditions were favorable, but [the greens] are small targets and you have to hit good shots.”

Wilson took advantage of the par fives, making birdie on two of the three, including the closing 18th, where he hit his second shot over the green and showed a good touch around the greens by chipping within a foot. Overall, Wilson kept himself in the right spots and capitalized when he could.

Greg Reilly of Darien and Andrew Biggadike of Ridgewood posting even-par 71s, while five players, including 2019 champion Brad Tilley of Sleepy Hollow posted 1-over 72s to remain within striking distance.

The invitational, welcoming players based on performances throughout the season, has become one of the area's most coveted invitations, with recent hosts including Wee Burn Country Club, Somerset Hills Country Club and Friar's Head.

The MGA Mid-Amateur is the record 10th different MGA event hosted by The Tuxedo Club. The course recently underwent several changes overseen by Rees Jones. In addition to redesigning the ninth hole, the work focused on improving bunkers and repositioning fairway bunkers for today’s game.