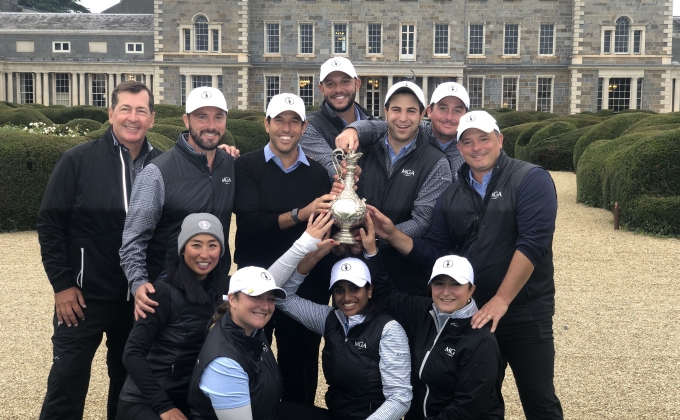 COUNTY KILDARE, IRELAND (October 13, 2021) - For the second time in the last three editions – and the second consecutive time on Irish soil – the biennial matchup for the Carey Cup ended in a tie. The MGA won four of the ten singles matches, Golf Ireland won four, and two matches finished tied. The draw was enough to leave the Cup in the MGA’s possession, since the Association had gained hold of it in 2019 at Arcola County Club.

The 2021 matches were the first to include women, and it was women who carried the MGA to victory, as the four women’s singles gave the MGA 3 ½ points with three wins and a tied match. Ina Kim-Schaad led off with an early sprint to a three-up advantage after just six holes, and cruised to a 5-and-3 final. Megha Ganne had a surprisingly tough time with Aideen Walsh, the young Irish schoolteacher who was two-up after two, before Ganne caught fire with seven subsequent birdies; Ganne was one-up on the 17th tee, and stuck her tee shot inside two feet for a gimme birdie and a hard-fought 2-and-1 win. Noelle Maertz broke open a tight match after the turn, closing out Paula Grant on the fifteenth green. And Alexis Hios, whose lengthy putt on 18 had given the MGA a crucial half-point in the four-balls, had a nip-and-tuck battle with Kate Lanigan, pulling out another vital half-point with a clutch win on the same 18th green.

It was a tougher go for the men, who faced an Irish team playing very much on form, with several playing the matches on their home course. Throughout the afternoon, the overall projected point totals suggested a narrow victory for the MGA, never more than 10 ½ - 9 ½.  But there was clearly potential for the score to swing quickly, because Golf Ireland led some matches by four and five holes, while the MGA leads were mostly two holes or one. At 3:00 pm, four hours after the first match teed off, Brad Tilley had the only MGA men’s victory, a 3-and-2 win over Marc Boucher, one of the Carton House members. There were only three games still going, and two of them fell into the Golf Ireland column in a matter of minutes. The fate of the Cup would be decided by the match between Mark Costanza, the reigning MGA Player of the Year (and likely defender of the title), and David Kitt, a 20-year-old university student whose schoolboy face belies his considerable game.

A win on the 16th hole gave Kitt a two-up lead. Costanza, whose wife Meredith was on the bag – and the two were on their honeymoon, having come to Ireland directly from an idyll in Italy – put his tee shot on 17 close enough for a likely birdie that became unnecessary when Kitt couldn’t get up and down from a greenside bunker. The par-five 18, which had already seen plenty of drama, provided a perfect stage: With all the other players and spectators on the hill beside the green, Costanza left his second shot just short of the putting surface, while Kitt’s ball was at flagstick depth but down the slope to the right, requiring a delicate pitch. Costanza went first and put his approach about eight feet past and above the hole.  Kitt’s pitch left him well short of the hole, and when he was unable to get down in two putts, he picked up Costanza’s marker and offered his congratulations. The 2021 U.S. Mid-Am runner-up had come from two down with two to play, ending his match and the full score at all square.

A tie for the MGA after Costanza wins 18 to tie his match! The MGA retains the cup! pic.twitter.com/ib9XCbQbHa

After Costanza hugged his wife and was mobbed by his teammates, he chatted with a few of the onlookers. “Was it really all down to my match?” he asked. “If I didn’t win that hole, that was it?”

Yes it was, and the MGA’s hopes couldn’t have been in better hands.