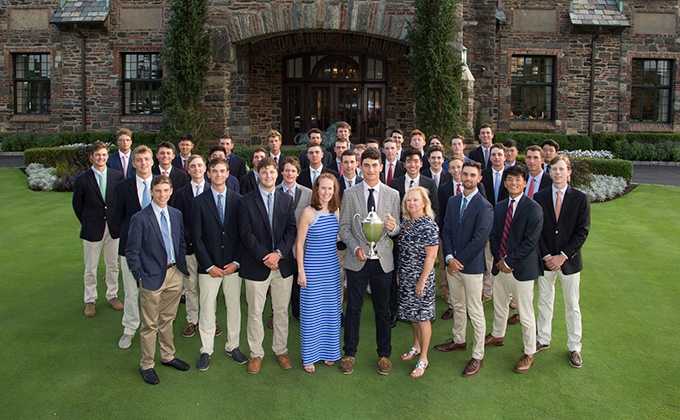 MAMARONECK, N.Y. (August 1, 2018) – A 2-under 33 on the opening nine of Winged Foot Golf Club’s West Course led Carter Prince of Centerport, N.Y., to a three-shot win on Wednesday in the 16th Carter Cup. The normally 36-hole championship was shortened to 27 holes following a 2-hour, 31-minute suspension of play due to lightning and heavy rains.

With the horn blowing at 1:14 p.m., Prince was just about to begin his afternoon round on the West Course following a morning 3-over 73 on the East Course that left him two shots off the pace. He carded three birdies in the morning, the last proving most crucial as a bounce-back following a bogey, triple-bogey sequence on Nos. 12-13. “I flew the [13th] green, and left and long of that green is dead,” said Prince. “Then I three-putted from four feet—that was the bad putting of the day—but I made a long putt on 14 right after to make up for it.” Prince closed with four consecutive pars for his 73 and, upon the suspension of play, hoped to get back out for the afternoon round.

“I was praying that we would play some more golf because I had a feeling I would post a good number,” said the 18-year old who will head to University of Pennsylvania this fall. “We got out there, played nine holes and I did that.”

Birdies on Nos. 3 and 6 highlighted Prince’s bogey-free 33. “I hit six-iron and just striped it,” said Prince of his shot on the par-three 3rd, which ended up a foot from the hole. “Then on six, my bunker game had been good the whole day, so I figured if I’m in the front right bunker off the tee, I should get it up and in.” Prince did just that, putting his drive in the bunker, blasting out to three feet and making the putt.

For Prince, who has had good showings all summer long, putting and ball-striking proved key to his steady play.

“I think my putting was really solid the whole day, especially on these greens, they’re really tough,” he noted. “I hung in there on the greens and I struck it really well to give myself a couple of key birdie opportunities.”

“It means a lot. I’ve been playing really well this year,” said Prince. “I came close yesterday at the Hebron—came in second and lost in a playoff. So, to finally get a win feels really good, especially at the Carter Cup.”

Sean Vowells of Chatham, N.J., held the lead after a morning 71, then posted a 3-over 38 on his afternoon nine to finish in second at 4-over 109. Jack Wall of Brielle, N.J., and Nathan Han of Somers, N.Y., finished tied for third at 5-over 110, while Jack Maguire of Ridgefield, Conn., rounded out the top-five finishers behind a 6-over 111.

Up next for Prince, and 10 other competitors from Wednesday’s Carter Cup, is the 116th Met Amateur Championship at Arcola.

With the win, Prince earns 225 points in the race for the MGA Junior Player of the Year Award Presented by Callaway.