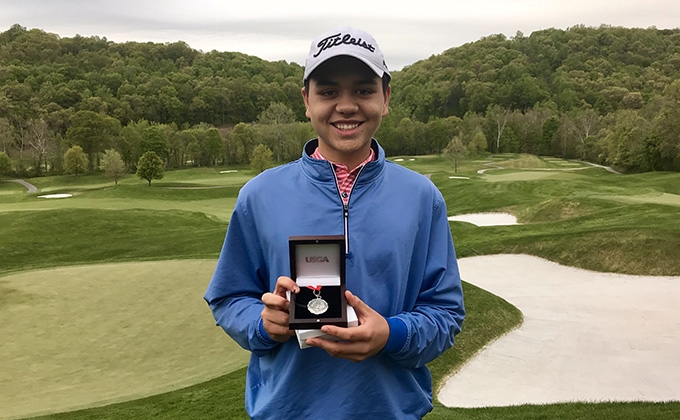 Sample, winner of the 2018 MGA/MetLife Boys Championship, played his first seven holes in even-par before reeling off six birdies in a seven-hole stretch. "The last few tournaments I've just struggled to get a bunch of putts going at the same time," said Sample, who turns 16 later this month. "Then all of a sudden, I made one on two early and then chipped in on nine to get to two-under, and from there birdied 11-12-13 and 14, so the putter was really hot today."

Entering the day, Sample had a simple game plan to avoid trouble spots and remain patient. "The thing that I noticed the most was that there are big numbers out there, so the biggest thing today was to avoid the big numbers and let the birdies come and it ended up working out," he said.

Two shots behind Sample were professionals Juan Alvares of Uruguay and Corey Birch of Ridgefield, Conn., as well as Florida State player Parker Reddig of Minneapolis, Minn., all with impressive 4-under 67s. Alvares, who took the top spot in a PGA TOUR Latinoamerica qualifier this year, registered the day's only bogey-free round.

With three players closing the day at 3-under 68, a playoff was required to decide the final two advancing positions. Paul Pastore of Stamford, Conn., and amateur Jack Wall of Brielle, N.J., both parred the first playoff hole--the par-four 18th--to advance. Gen Nagai of Japan took the first alternate slot, while 2017 MGA Player of the Year and recent Ivy League individual champion James Nicholas of Scarsdale, N.Y., took the second alternate position as the only player on-site who finished at 2-under 69.

This was the MGA's fourth MGA-conducted local qualifying in the last four days. To catch up on complete results, click here.