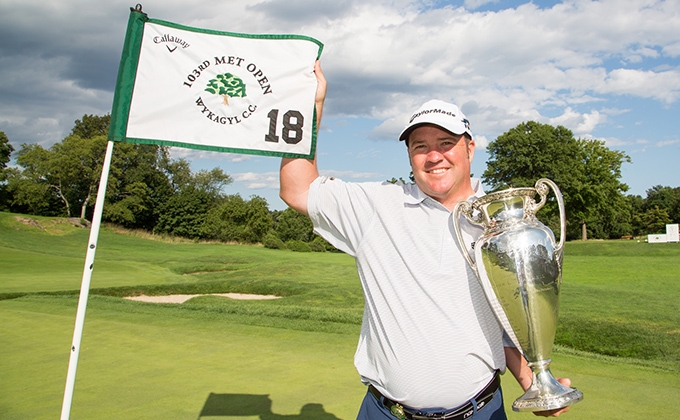 NEW ROCHELLE, N.Y. (August 23, 2018) – A blistering start propelled Andy Svoboda of Engineers to victory in the 103rd Met Open Championship Presented by Callaway on Thursday at Wykagyl Country Club, allowing him to hoist the prestigious Walker L. Trammell trophy for the second time in his career. Despite entering the day one shot off the lead, Svoboda’s third consecutive round in the 60s (68-69-68) led him to an 11-under total and a one stroke victory over 17-year-old Jack Wall of Manasquan River, who earned low amateur honors.

Svoboda—who won the title in 2003 as an amateur—came out firing in the final round, playing his first six holes in 5-under par to quickly turn a deficit into a multi-shot lead. “I knew I just had to be aggressive,” said Svoboda of his early scoring. “Everybody was playing really well. I knew I was going to have to get off to a hot start.”

After making birdies to take advantage of the par-five 1st and 3rd holes, Svoboda rolled in a downhill, sliding 25-foot birdie putt on the 210-yard par-three 4th to jump atop the leaderboard. He wasn’t done there though, as he pulled driver on the short par-four 6th, which played 285 yards with the tees slightly forward. Svoboda landed his drive on the green, with the ball coming to rest just 12 feet above the hole. He drained the delicate, downhill putt, climbing to 12-under for the championship.

While the final pairing of Cameron Young of Sleepy Hollow and Wall were unable to make up ground on Svoboda, reigning MGA Player of the Year James Nicholas of Westchester fired a 5-under 30 on the opening nine to jump to 8-under and into contention—especially after Svoboda made his first miscue of the day with bogey on the par-three 7th.

While the leaderboard saw a lot of early shifting, it fell calm through the middle of the round with only Jason Caron of Mill River Club—playing alongside Svoboda—making a move with birdies on Nos. 8 and 10 to move to 9-under. However, with three par-fives on the inward nine, plenty of chances remained available for players to make a move.

After a bogey on the par-four 14th, Nicholas tallied birdies the par-five 15th and 18th holes to fire the day’s low round of 6-under 66 and to get in the clubhouse at 9-under several groups in front of the final pairings. Svoboda and Caron both dropped shots on the 14th as well, but Svoboda bounced back by making his ninth birdie of the week on a par-five and returning to 11-under.

“I knew that [the par fives] were where you have to score on this golf course because the par threes are very difficult and long,” said Svoboda. “So, I just drove the ball really well on the fives and then I was able to knock it on in two and have long two putts, so that was pretty much the key to the week.”

While Svoboda made routine pars on the final three holes—just leaving a birdie bid short on the 17th—Wall made one last charge over the closing holes. The Christian Brothers Academy senior tallied birdies on Nos. 15 and 16 to move to 9-under. He found the green of the par-five finisher in two and had look at eagle from outside of 50 feet, but his try came up short and he finished as runner up with low amateur honors at 10-under par.

For Svoboda, the victory makes him the first-ever player to win the Long Island Open, New York State Open and Met Open in the same season—something Svoboda says his boss Chris Carter helped him imagine. “After I won the first two, the pressure was on, but I tried not to think about it,” said Svoboda of the feat.

It ended up as a perfect scenario for Svoboda, who has an uncle that is a longtime member at Wykagyl and was already plenty familiar with the classic layout prior to the week.

“I love this course,” said Svoboda, who joins names like Alex Smith, Byron Nelson, Sam Snead, Nancy Lopez and Annika Sorenstam as champions at the historic club. “Wykagyl is such a great course and I’ve played here so many times, I was just looking forward to competing and playing in the Met Open and just trying to have fun and enjoy it. It turned out great.”

With the victory, Svoboda joins Johnson Wagner as the only other player to win the Met Open as both an amateur and a professional—with Svoboda grateful to accept the $27,500 winner's share. His span of 15 years between wins is the second largest in the championship’s history, with Mark Mielke having won in 1992 and 2008.

Nicholas finished solo third at 9-under, while Caron and David Pastore of Fairview—who fired rounds of 66-69 over the final two days—claimed solo fifth. Tyler Cline of The Tuxedo Club had a steady week as scores of 71-71-70 landed him in a tie for sixth with Max Buckley of Westchester at 4-under-par. Josh Rackley of Tam O’Shanter—last year’s champion at Hollywood—tied for eighth at 3-under alongside amateurs Daniel Gabel of McCann, Darin Goldstein of Noyac, Stewart Hagestad of Deepdale and Cameron Young of Sleepy Hollow.

The hosting of the 103rd Met Open Championship continues Wykagyl’s spectacular history of championship golf. The classic layout traverses the property’s hills, valleys, and rock outcroppings to provoke thoughtful play the entire round. Despite the rain and heat over the last month, superintendent Dan Rogers and his crew had the course in superb championship condition.

The top 25 finishers are exempt into the 104th Met Open Championship Presented by Callaway, which will take place at The Piping Rock Club in Locust Valley, N.Y.