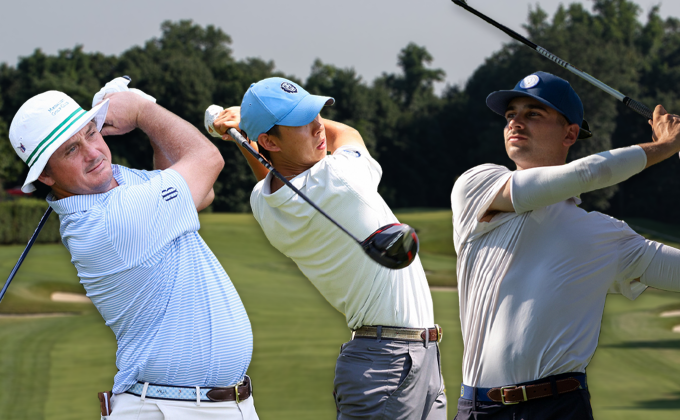 SCARSDALE, N.Y. (August 4, 2022) – Brad Tilley of Sleepy Hollow, Lukas Clark of Galloway National and Nathan Han of Salem tied for medalist honors after 36 holes of stroke play in the 120th Met Amateur Championship at Fenway Golf Club. The three were the only players to finish the two rounds under par, each carding matching 1-under 139s on the day. Clark fired the lowest round of the day on his second 18, carding a 3-under 67 to clinch a spot in the match play bracket.

“It was just about staying patient and staying below the hole for me,” said the 23-year-old Clark. “I had never played here before so I kind of used my first 18 as a practice round to feel things out. It was nice to get hot there for a bit and my stroke play and wedge play really helped.”

Tilley, who won the 2022 Mittelmark Invitational at Fenway early in the season, was steady through the day, especially in his second round. After a bogey on his first hole, the par-4 10th, he went 2-under the rest of the way, with no more blemishes on the card.

“You have to make a lot of comeback putts from a four to six-foot range because the greens are so tough and I was able to do that today,” said Tilley, who also won the Westchester Open this season. “In the morning I made a lot of mistakes but in the afternoon I started with a double and then from there just two birdies and the rest pars so it was a good way to finish.”

Han stayed patient as well during his round, aiming for the center of the greens and taking what the course gave him. Despite a birdie putt just sliding by on the 18th, he was still able to tie for low round of the stroke play portion of the tournament.

“This course is so tough, if you miss it in the wrong spots you’re really dead,” said two-time MGA Boys' champion Han. “For whatever reason, the wind always seems to be blowing here. I stayed patient and I made a few long putts towards the end of the round.”

Han was more than good on his final nine holes, making birdie on five of his last seven to solidify his position in the Round of 16.

Despite a competitive field, no playoff was needed to determine the bracket. Thomas McCarthy of Essex County, Johnny Bush of Plainfield and Tyler Gerbavsits of Huntington Crescent finished at even par, while Robbie Herzig of Old Oaks was the only player to register 1-over for the day.

Reigning MGA Mid-Am champion Chris DeJohn of Arcola used a 2-under round in the afternoon to enter the clubhouse at 2-over alongside 2017 Ike champion Matt Lowe of Bethpage.

Christian Cavaliere of Mahopac and Ben Loomis of Winged Foot finished at 3-over.

Sample has a chance to become the fourth golfer in MGA history to complete the MGA Grand Slam. Costanza, the two-time reigning MGA Player of the Year, has now made the match play portion of the Met Am in three straight years.

Friday will feature the Round of 16 and Quarterfinal matches, with the first match of the day teeing off at 7:30 a.m. Saturday the semifinals will be held on Sunday a champion will be crowned after 36 holes of match play.