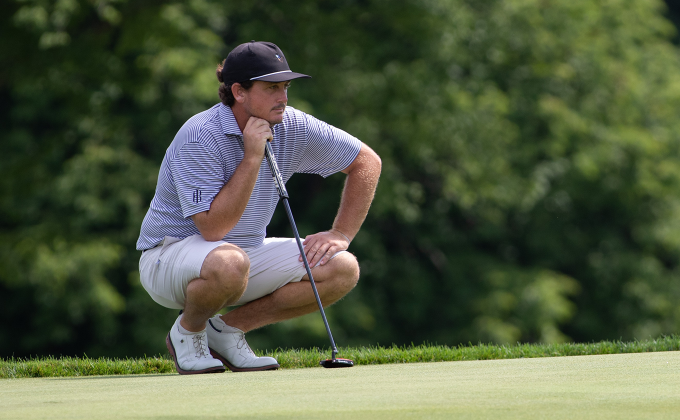 ELMSFORD, N.Y. (November 1, 2022) – The Metropolitan Golf Association is pleased to announce Brad Tilley of Sleepy Hollow Country Club as the recipient of the 2022 MGA Jerry Courville Sr. Player of the Year Award. Tilley collected four wins on the season, including the 120th Met Amateur Championship, en route to earning the accolade for the first time.

The MGA Jerry Courville Sr. Player of the Year Award is presented annually to the Met Area amateur who compiles the best record in select events during the year. It is based on a system in which players earn points for their finishes in designated local, national, and international championships. Tilley earned 1002 points, propelled by wins in the Mittlemark Invitational, 100th Westchester Open, 120th Met Amateur and The Farrell. The award will be presented to Tilley at the MGA’s 125th Annual Meeting and Dinner on Wednesday, December 7 at Westchester Country Club in Harrison, N.Y.

Tilley, 39, began his Met Area season with a win in the Mittelmark Invitational at Fenway Golf Club—host of the 120th Met Amateur later in the summer and stroke-play co-host of the 2023 U.S. Mid-Amateur.

Building on his confidence from an early season win, Tilley next won the 100th Westchester Open Championship Presented by Poland Spring in June at his home club. He opened with a bogey-free 4-under 66, but was off a scorching 8-under pace set by Christian Cavaliere. However, Tilley made up ground with a 5-under 65 in the second round before closing the deal with a 1-under 69.

“Obviously you’re feeling your more pressure at your home course and you want to get the job done there,” said Tilley. “But then there’s another pressure that takes away from that pressure—trying to win a big tournament, a professional event. I had never won a professional event until then. To do it [at Sleepy Hollow] in the 100th was amazing.”

Though Tilley had just one competitive round between that victory and the Met Amateur, he arrived at Fenway with plenty of confidence from earlier in the season.

He earned co-medalist honors and worked his way through the challenging bracket, playing 119 holes between his Thursday to Sunday run to the title—his second MGA major.

“I think I was the oldest player in match play by a few years. It’s a long week, it’s a tough week,” said Tilley. “To pull off the victory in a tournament I’ve had circled every year as a goal to win, it’s a great thing to be able to call yourself a Met Amateur champion.”

While his three wins propelled him toward the top of the yearlong points race, Mark Costanza of Hamilton Farm was putting together another highly consistent season in an effort to earn the honor for a third consecutive year. He finished fourth in the Ike, third in the New Jersey Open, advanced to the semifinals of the Met Amateur before falling to Tilley, and won two matches in the U.S. Mid-Amateur.

Without Costanza in the field for the inaugural playing of The Farrell, Tilley took full advantage, playing spectacular golf to notch his fourth win of the season and draw within three points of Costanza.

“To call yourself the inaugural champion is really cool. You don’t get that opportunity often, if at all,” said Tilley, whose daughters saw him win for the first time in-person. “I was really proud I was able to do that and in front of the family, too, which was really special.”

While Costanza narrowly edged Tilley in the MGA Mid-Amateur at The Tuxedo Club, Tilley added the Westchester Mid-Amateur at Pelham Country Club to an already packed schedule. He needed a solo-fifth finish or better and closed the 36-hole event in fourth to pass Costanza and earn the coveted year-end title.

“I’ve put so many good years together that I can think of that I felt someone always had a standout year and I just never got to the top of that list,” said Tilley, who has finished sixth, fifth, fifth, third and second in the last five years since regaining his amateur status and returning to the Met Area.

“To be able to add my name to this amazing list and be part of that fraternity of guys that have won this award is an incredible honor,” said Tilley. “It hasn’t really all set in.”

While Tilley has now earned 13 victories over the last four years—nine more than any other Met Area player in that span—a new level of consistency and bringing his best game during some of the season’s biggest moments sent him toward achieving a longtime dream.

“Those wins this year were really special,” said Tilley. “It’s so hard to win and you need things to go your way. When I think back on it, I have to pinch myself a little bit and realize what actually just happened. It’s nice to have that pay off with the Player of the Year award.”