MIDDLETOWN, N.J. (May 7, 2013) – The first time’s a charm for Jon Tingley of Stanton Ridge. Playing in his first MGA event, the Flemington, 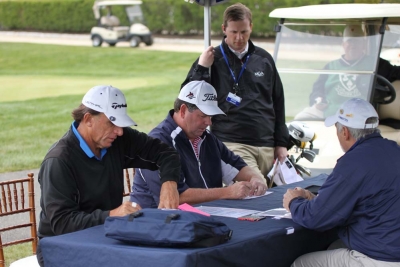 N.J., resident fired a final round even-par 72 to capture the 2013 MGA Senior Amateur Championship at Navesink Country Club in Middletown, N.J., by three shots over several past champions.

Tingley, Whitney Share Lead After First Round of Senior Amateur

Tingley, Whitney Share Lead After First Round of Senior Amateur

MIDDLETOWN, N.J. (May 6, 2013) - Familiar faces top a packed leaderboard after round one of the 86th Senior Amateur Championship at 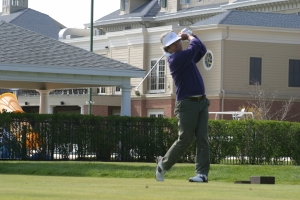 Tingley Leads All After 2-under 70

Tingley Leads All After 2-under 70

MIDDLETOWN, N.J. (May 6, 2013) - Midway through the first-round at the 86th Senior Amateur and 2011 NJSGA Senior Open champion Jon Tingley of Stanton Ridge has the lead after an impressive 2-under 70. Despite chilly and windy conditions, Tingley, who teed off at 8:27 a.m., managed to record four birdies and only two bogeys.

ELMSFORD, N.Y. (June 1, 2012) – The final field for the 57th Ike Championship, scheduled for June 25 & 26 at Atlantic Golf Club in Bridgehampton, N.Y., has been officially announced following Thursday's final sectional qualifier at Siwanoy Country Club. More than 700 Met Area amateurs competed in five qualifying rounds with hopes of advancing to the Ike, one of the premiere stroke-play events on the MGA tournament schedule.

Below is a wrap-up of sectional qualifying:

MAMARONECK, N.Y. (May 25, 2012) - Lieutenant Colonel Tyler Zagurski of Mercer Island, Wash., doesn't play as much golf as he'd like to. Most of his time and energy is invested in his role as commanding officer of the 1st Battalion, 9th Marines division. Even when Zagurski—whose military career spans over 21 years—found out that the membership of Winged Foot Golf Club invited his regiment to a golf outing at their storied venue, there wasn't much celebrating. He got right to work. It's the Marine in him.

ELMSFORD, N.Y., (May 27, 2012)  Continuing the strong play in 2012 that has earned him a victory in the New Jersey Senior Open and a spot in U.S. Open Sectional Qualifying at Canoe Brook on June 4, Bill Britton shot an even-par 71 in the final round, earning him Low Club Professional honors at the 73rd Senior PGA Championship at The Golf Club of Harbor Shores in Benton Harbor, Michigan. Britton, 56, finished at even par (T35) for the championship, two shots better than the next club pro Sonny Skinner.

GLADSTONE, N.J. (May 19, 2012) – The MGA Foundation conducted the first of three annual MGA/MetLife Youth Clinics on Saturday, May 19 at Hamilton Farm Golf Club in Gladstone, N.J. The event was held in conjunction with the LPGA’s Sybase Match Play Championship and featured more than 35 junior golfers from The First Tee of Metropolitan New York’s Plainfield West and Weequahic Park sites. The young participants were welcomed by MetLife’s affable mascot, Snoopy, before enjoying a day of golf instruction.

ELMSFORD, N.Y. (May 18, 2012) - Two weeks, 477 golfers, and 72 holes later, the four MGA-conducted local qualifying rounds for the 112 U.S. Open Championship are officially in the books. All roads now head toward Canoe Brook Country Club in Summit, N.J., for a chance to compete with the world’s best at the Olympic Club from June 11-17.

BASKING RIDGE, N.J. (May 14, 2012) – Alley Olsen and Bill Hamberger of Blue Hill Golf Association fired a 10-under 62 to win the 20th MGA Senior Net Four-Ball Tournament at New Jersey National Golf Club in Basking Ridge, N.J. Olsen and Hamberger were one of five teams that came in with 62, but won due to the tie breaker that goes to the team with the greater total age.