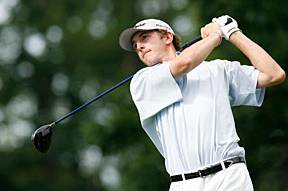 Championship presented by Canon. The 54th renewal of the Ike, the MGA’s amateur stroke play championship, will be played on Tuesday and Wednesday, June 30 and July 1.

Every month former MGA Senior Director of Rules and Competitions Gene Westmoreland will answer one question posed by the readers of the MGA e-Revision Newsletter (click here to sign up). Neal from Westchester County asked Gene the following Rules question:

Cut Comes at 144, and Three Locals Miss Out

Cut Comes at 144, and Three Locals Miss Out

ELMSFORD, N.Y. (June 20, 2009) — Coming into the 109th U.S. Open Championship, the three players with local ties had somewhat varying aspirations. Fairfield, Connecticut native J.J. Henry was looking to contend in an Open for the first time in five tries; Andrew Svoboda of Larchmont, N.Y., hoped to build on his performance last year, when he made the cut at Torrey Pines; and Creek head professional Sean Farren was eager to see how well he could perform in his first U.S. Open.

ELMSFORD, N.Y. (June 19, 2009) — Fairfield, Connecticut native J.J. Henry teed off at just past 10:20 this morning and shot a first-round 73. He began his second round at 4:52 p.m. and will complete as much of his second round as possible until tournament officials suspend play for darkness.

Henry had an up and down round, with birdies on the second and 16th holes to go along with his five bogeys. 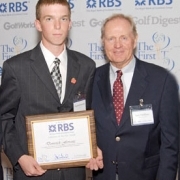 (June 18, 2009) - Dominick Ferrante, 16, from The First Tee of Nassau County was named an RBS Achiever of the Year during an awards ceremony and dinner attended by Jack Nicklaus, RBS ambassador and Trustee of The First Tee on Wednesday, June 18. Ferrante is the second student from TFTMNY to win the award, the first being So

ELMSFORD, N.Y. (June 18, 2009) — Creek Club head professional Sean Farren got off to a perfect start in the first round of the 109th U.S. Open Championship. He began his round on the first tee at 9:01 a.m. and parred the first three holes, hitting each fairway and each green in regulation. Unfortunately for him, he didn’t have a chance to keep the momentum going.

ELMSFORD, N.Y. (June 17, 2009) — Though he now makes his home in Fort Worth, Texas, J.J. Henry will forever be linked to Met Area amateur golf. The Fairfield, Conn., native who grew up playing at the Patterson Club won three Connecticut State Amateur titles (1994, ’95 and ’98) and was a mainstay of MGA competition throughout the 1990s, competing in the Met Junior, the Met Amateur, Met Open and the Ike.