RUMSON, N.J. (August 7, 2014) - The semifinal matches have been set at Rumson Country Club for the 46th MGA/MetLife Boys Championship. 16 talented junior golfers played in a match play bracket today to determine the final four and they will play 18-hole matches again tomorrow to determine the ultimate champion.

RUMSON, N.J. (August 7, 2014) - The first round of matches are complete at the 46th MGA/MetLife Boys Championship at Rumson Country Club and the final eight players are heading back on the course to begin their second round.

Ten Met Area Locals in the field at the U.S. Amateur

Ten Met Area Locals in the field at the U.S. Amateur

UPDATED 2:58 p.m. August 14 - The amazing run at the U.S. Amateur at Atlanta Athletic Club for Cameron Young of Scarborough, N.Y. has come to an end in the quarterfinals. After coming up with some late round magic in each of his first three matches, he came up just short in his quarterfinal match against Gunn Yang of Korea, losing 2 down. Yang won the 17th with a par and then eagled the final hole, the par 5 18th, for a spectacular victory over Young.

ELMSFORD, N.Y. (August 4, 2014) - This week the 46th MGA/MetLife Boys Championship heads back to Rumson Country Club where in 2011 Theo Humphrey of Greenwich, Conn., won the event over some of the best current junior players in the area. This year’s championship features some very young talented players who are poised to become forces on the MGA circuit in years to come.

LOCUST VALLEY, N.Y. (August 3, 2014) - David Pastore won the 112th Met Amateur Championship in exciting fashion when he made a hole-in-one on the 35th hole of the final match 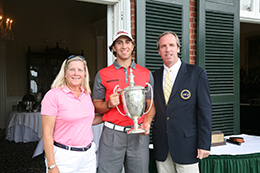 against Matt Lowe of Farmingdale, N.Y.

Pastore Leads 1 up after first round of final

Pastore Leads 1 up after first round of final

LOCUST VALLEY, N.Y. (August 2, 2014) - David Pastore leads 1 up over Matt Lowe after the first 18 holes of the Met Amateur final match. The first 18 hole match was a close one, with both players routinely making pars and halving the holes. Lowe made the turn at 1 up, but after Pastore birdied 14, the match got back to all square.

Pastore and Lowe advance to Final at the 112th Met Amateur

Pastore and Lowe advance to Final at the 112th Met Amateur

LOCUST VALLEY, N.Y. (August 2, 2014) – After two grueling semifinal matches at The Creek the championship match is set for tomorrow at the 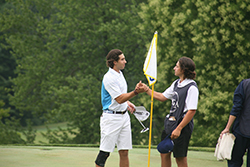 112th Met Amateur. The final will be between Ike Champion David Pastore of MGA eClub – Westchester/Fairfield and Matthew Lowe of Colonial Springs.

Semis Set for Met Am

Semis Set for Met Am

LOCUST VALLEY, N.Y. (August 1, 2014) - It was an exciting day of match play action at the 112th Met Amateur Championship at The Creek. While this morning’s round of 16 matches ended early with some large margins of victory, it was quite the opposite in the afternoon quarterfinal matches as three matches went to extra holes in order to determine the semifinalists.

ELMSFORD, N.Y. (July 29, 2014) - The 2014 Williamson Cup teams have been decided and the MGA team is once again stacked with talent.  For two straight years in 2011 and 2012 the MGA teams claimed victory and after last year’s runner-up finish, they hope to return back to the winner’s circle at Laval sur le Lac Club in beautiful Quebec, Canada.

McGovern, Esposito, Corcoran all headed to Valhalla for PGA Championship

McGovern, Esposito, Corcoran all headed to Valhalla for PGA Championship

ELMSFORD, N.Y. - The 96th PGA Championship heads to Louisville, Ky.,  August 7-10 at Valhalla Golf Club for the third time and a few of the best Met Area local club pros earned their way into the field. It will be one of the strongest PGA Championship fields in recent memory as it features 29 major champions and barring any withdraws, for the first time in major championship history every player ranked in the top 100 of the Official World Golf Ranking will play for the Wanamaker Trophy.